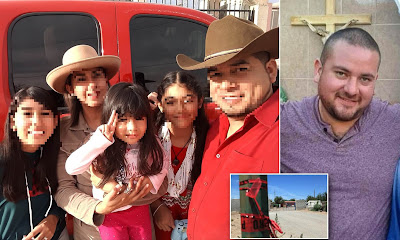 Chihuahua state police arrested a man suspected of taking part in a Juárez attack that killed four people, including three girls, during the fatal abduction of an El Pasoan a year ago.
El Paso resident Jose Francisco Quezada Espinoza, 29, was taken away by gunmen in Juárez and found dead about a week later in 2019.
Gunmen fired more than 120 shots during a deadly assault outside a ranch in the Riberas del Bravo area, across the border from Socorro, on Aug. 25, 2019.
The Chihuahua attorney general’s office announced over the weekend that investigators arrested a man on a warrant on homicide charges in the case.
The detained man, identified only as Manuel de Jesus C.E., is accused in the four homicides during the attack.
The arrest was the result of an investigation, unspecified intelligence reports and evidence at the crime scene, the attorney general’s office said in a news release. He has not been charged with kidnapping. 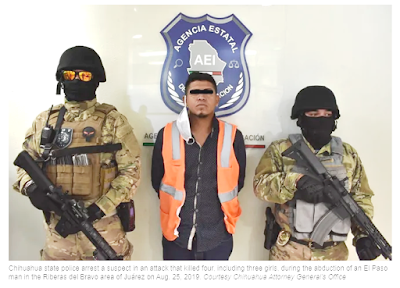 Killed in the shooting were sisters Arleth Sanchez Gordillo, 4; Sherlyn Sanchez Gordillo, 13, and Lindsay Sanchez Gordillo, 14, along with their uncle, Rafael Gordillo Gonzalez, 25.
News accounts reported that the girls were shot while in the back seat of a Chevrolet Silverado and Rafael Gordillo died outside the front passenger side.
In the days following the murders, Jorge Nava Lopez, the state prosecutor in Juárez, told reporters that the attack might have been carried out by a small drug-trafficking cell from the Valley of Juárez.
The violence was suspected of possibly being in retaliation for the death of a valley drug dealer a week earlier.
Quezada was a decent man who was not involved in criminal activity and was abducted in a case of mistaken identity, a woman identifying herself as his sister posted on Facebook last year before his body was located.
FBI agents continue assisting Mexican law enforcement in the kidnapping investigation because Quezada was a U.S. citizen and an El Paso resident, a spokeswoman for the FBI in El Paso said.
The arrest last week occurred amid a rise in murders in Juárez this year. There have been 1,078 homicides this year, including 38 this month as of Tuesday, according to a daily tally by the Norte Digital news website.