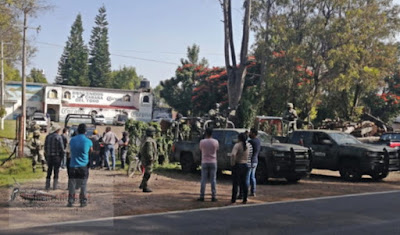 A massacre was registered inside the La Cabaña del Toro bar in the municipality of Jaral del Progreso, Guanajuato,  after an armed commando entered and murdered 11 people.

In  preliminary reporting, the dead are identified as 7 men and 4 women, in addition to 1 injured person who was transferred to the hospital.

The massacre occurred early hours today when the emergency services were informed that several injured people in the nightclub located at the exit of Jaral del Progreso.

When the emergency services arrived, they confirmed that 11 people were dead,  they then cordoned off the area.

Details are sketchy at this point, it is only known that a commando arrived and fired arbitrarily at employees and customers and then fled.

What is being reported:

A Narco-Message was left behind

No official word from state police agencies or the attorney general’s office.

An update will be posted when available