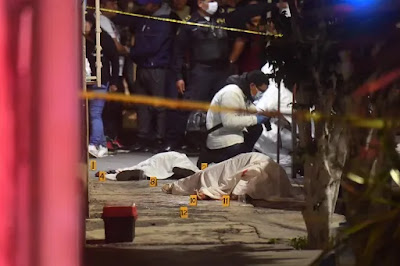 A few hours after the “Grito” (Cry of Independence), sicarios readied their weapons and made the Defensores de la República colonia tremble by executing a mother and child, the child was only 10 years old.

On Tuesday night, Leonela and Jade – family members- were walking along Norte 9-A and Poniente 108 streets, in the said neighborhood of the Gustavo A. Madero area in Mexico City.

At around 8:10 p.m., the women were surprised by men traveling on a motorcycle, who shot them directly and without warning, and then disappeared into the streets. The neighbors at first confused the shots with the pyrotechnics of the national holidays, but later they discovered that the victims, aged 32 and 10, were lying on the sidewalk. Although they requested ambulances immediately, upon arrival, the paramedics could only confirm that both had already died due to the gunshot wounds they presented to their heads.

The adult was identified as Leonela Bravo Arguijo, 32 years old and the 10 year old as Jade Angeline.

Witnesses told the elements of the Lindavista Sector that they only managed to distinguish a black motorcycle on which the alleged assailants fled. In minutes, the area was surrounded by neighbors, who were already getting ready for the celebration of the anniversary of the Independence of Mexico. After the experts collected the evidence and removed the bodies, the Public Ministry Agent put together an investigation folder under the femicide protocol to clarify the motive for the attack.