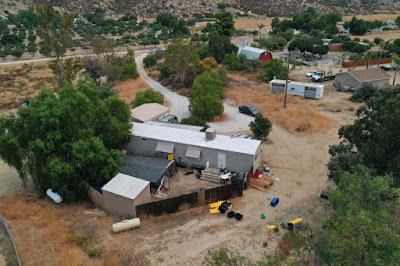 The sheriff’s deputies arrived at the dusty lot east of Temecula a half an hour after midnight on Monday. A caller had reported an assault.

They discovered a gruesome scene: Six people dead from gunshots. A seventh victim, a woman, was still alive, but died shortly after at a hospital.
Along with the bodies, investigators discovered what Riverside County Sheriff Chad Bianco described as the makings of an “obvious large-scale illegal marijuana processing center.” There were hundreds of plants, a makeshift greenhouse, a lab for using butane to extract valuable THC from pot plants, and more than 1,000 pounds of processed marijuana with a street value in the millions, the sheriff said.
Authorities didn’t identify any of the victims Tuesday. Bianco said his investigators were pursuing a theory that multiple assailants had carried out the killings , and he suggested at a news conference Tuesday evening that the sprawling operation had been overseen by sophisticated criminals.
“This was not that they just happened to be growing marijuana,” he said. “This was a very large operation, a very organized-crime type of an operation.” 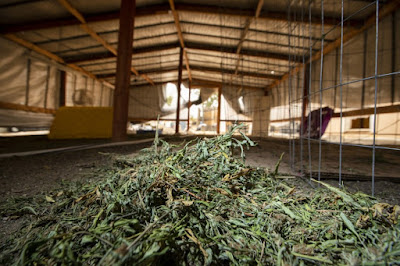 California may have created a legal market for marijuana in 2018, but its black market remains robust; growers who raise and harvest their crop illegally can evade expensive licensing fees and other regulatory costs, undercutting their above-board competition.
Violence, law enforcement officials say, is an omnipresent threat with illegal grows. Illicit harvests bring in huge quantities of cash to operators who typically are blocked from using banks or relying on law enforcement for protection. The killings this week add to seven other homicide cases linked to illegal marijuana operations that Riverside County detectives have investigated this year, the sheriff said.
Bianco said at least 20 people were living on the property in the small community of Aguanga on the edge of the Cleveland National Forest, which included a house, a trailer and other makeshift dwellings. The victims were found “in or around” one of the structures, although the sheriff didn’t say which one. Bianco declined to say whether any guns were found at the property.
Trash littered the grounds Tuesday. Women’s clothing and soda bottles were strewn across the trailer’s front porch. A pickup was parked out front, its doors flung open to show clothing draped on the seats and an envelope on the floor marked “$8,300.” 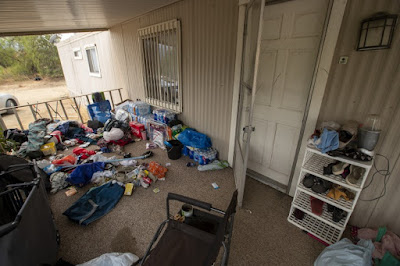 Behind the trailer was a greenhouse, its cover torn open. Grow plugs, used to sprout marijuana seedlings, were scattered on the ground. Six metal folding chairs had been arrayed in a row; a seventh was nearby, empty boxes of pizza and water bottles stacked atop it.
Taped to the home’s front door was a handwritten note that read in English, ‘Welcome to our home, please take your shoe off before enter the house,” and a similar message beneath it in Lao, the primary language spoken in Laos. All of the witnesses interviewed at the scene were Laotian, Bianco said.
On Tuesday morning, Eric Nguyen, 29, came to the property to retrieve his clothes from the house. Nguyen, who lives in Ohio, said he had come to California to seek medical treatment and visit marijuana dispensaries. He said he didn’t witness the shooting but encountered sheriff’s investigators when he returned to the home.
Nguyen said he and others staying in the home were friends of the owner. Authorities have yet to conclusively identify the property’s owner, but they believe the home was being rented out, Bianco said.
The sheriff said his department’s probe would be complex and span state lines. “This is not going to be an easy investigation,” he said.