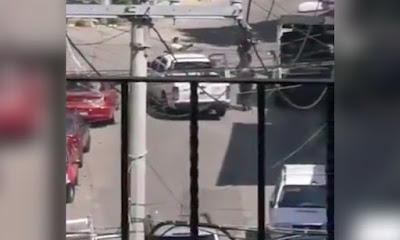 Five firearms were seized at the scene. Photo: Video shot

In Acapulco , Guerrero, a shootout between police and criminals left two people dead. The events occurred on the morning of Wednesday, September 2, according to the State Attorney General’s Office (FGE) in a statement that they spread through their social networks.
According to the first investigations, Ministerial agents of the FGE were attacked with firearms by armed civilians dedicated to the crime of extortion in the Loma Bonita neighborhood; this in the suburban area of ​​the municipality of Acapulco.
The result of this shooting in Acapulco was that two of the alleged extortionists died at the scene, while the Guerrero authorities seized five firearms at the scene.

Anonymous complaint led to the finding of the extortionists:
The statement released by the Attorney General of the State of Guerrero, indicates that the ministerial agents responded to the call of an anonymous complaint alerting that unknown and armed people were aboard a compact vehicle, who were engaged in the crime of extortion, in businesses established in the colony Loma Bonita, from Acapulco.
For this reason, the security forces went to the scene. When the suspects were located, the FGE agents were received with firearms, to which the authorities responded to the attack which unleashed a gun battle of shooting.
So far, it is unknown how many subjects participated in this shooting unleashed in the municipality of Acapulco ; It has not been detailed whether there were any detainees. 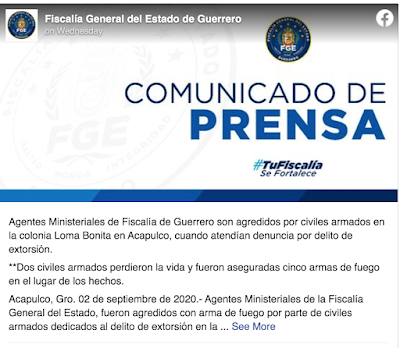 Neighbors share videos of the shooting in Acapulco:
After this shooting took place in Acapulco , Guerrero, some inhabitants of the area where the scene took place shared videos on social networks, where uniformed men can be seen running through the busy streets after the alleged extortionists.
Some other images did not capture the facts, however, it was possible to record the sound of the weapons constantly detonated.
For this shooting in Acapulco there was no report of collateral damage.