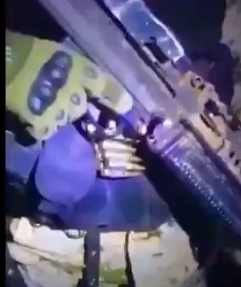 A video circulates where narcos who call themselves Los Durango or Jinetes de la Muerte exhibited themselves on social networks displaying their powerful arsenal as they walk through the limits of the states of Sonora and Durango in Mexico and launch a threat to the group allegedly headed by Rafael Caro Quintero, alias el Narco de Narcos.

Later in the video, they exit  the truck and once again show off their weapons, ready to shoot, all this while listening to a narcocorrido.

While in another video, which everything indicates was taken from a live broadcast, the alleged leader of said criminal cell launches a threat:

“We are not going to leave until the town is cleansed, (…) all those who have been causing harm to people who live their life doing good, people who work, Just as they killed the footballer, also when they have gone to collect piso they have killed  innocents, the people in the restaurant,  people that have done nothing to you.”