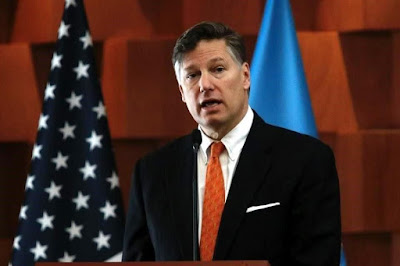 The United States Ambassador to Mexico, Christopher Landau, urged that the authorities work together on both sides of the border against organized crime.

“The fight against organized crime and drug trafficking is a shared fight. Criminals and drugs kill Mexico and the United States,” said the diplomat on his Twitter account.

“We urgently need to work shoulder to shoulder on both sides of the border. It is not easy at all, but we are more the good guys.”

For her part, the Consul of Los Angeles, Marcela Celorio, reported that she had already met twice with the former Secretary of National Defense, Salvador Cienfuegos, who has been detained since Thursday  in the United States.

“On the instructions of Foreign Minister Ebrard, the Consulate of Mexico in Los Angeles has been in communication with the federal authorities in the case of General Salvador Cienfuegos, which facilitated consular access, Article 36 of the Vienna Convention on Consular Relations,” he said. .

“I interviewed General Cienfuegos twice, the first by phone to make sure of his state of health and his confinement conditions; the second personally, he was given the proper consular assistance and I informed him about his rights in the United States.”

“The work of the consulates is to protect the rights of detained Mexicans, ensuring due process of law and dignified treatment throughout the process,” said Celorio.