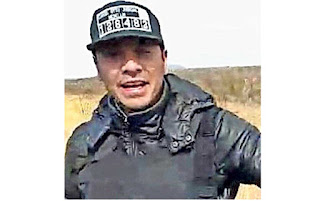 La Línea uploaded beheading video to social media after the confrontation on the Coronado-López highway.

The man who appears in a video beheading a male who was murdered during a confrontation between criminal groups that called themselves “La Línea” and “Gente Nueva”, has become the primary target of various police corporations in the state of Chihuahua , informed staff of the State Attorney General’s Office (FGE).

In one of the videos, captured by the members of the “Línea” group, it’s observed when a man receives the instruction to behead the corpse that lies on the road.

The man assumes a squatting position and with a knife begins to behead the deceased victim. For a few seconds, he warns his companions that the knife is dull. And they urge him to continue.

It takes him some time to behead the body. He then takes the head by the hair, and lifts it while the blood drips.

He is then heard screaming and howling, “Absolute Línea”.

Dressed in blue jeans, with body armor underneath a black jacket, the executioner also wears a cap with letters and the numbers 128482.

Yesterday the FGE announced that this person, whom they are trying to identify by their physical characteristics, has become the priority objective to locate the rest of the group of hitmen who participated in the confrontation that occurred last Sunday, February 14 at the Iturralde junction, where five deceased individuals were found.

The 5 victims of the confrontation that took place on the Coronado-López highway were identified, three were originally from Sinaloa and two more from the region.

The residents of Sinaloa are Ángel Alberto Rodríguez Becerra, 25, a native of Mazatlán; José Guillermo Villarreal Mata, 35, of Culiacán, as well as Jesús Andrés Samaniego Rocha, 27, who lives in Navolato.

Hundreds of heavy-caliber shells were found at the crime scene. In addition to six vehicles and tactical equipment.

Just on February 10, another of the FGE’s priority targets was assassinated. Samuel Colorado Quiroz, 33, a former agent of the State Security Commission (CES), was executed in the López Mateos neighborhood of Ciudad Juárez.

The person had already been arrested for federal crimes and subsequently released, according to the journalistic file and data from the State Attorney General’s Office.

He was killed by two hitmen who used rifles, at the intersection of Tultenango and General Jacinto Treviño streets, while he was washing a truck and his children were a few meters away.

The FGE identified the victim as part of the criminal group ‘La Empresa’ and placed him as a priority target because he was considered a generator of violence, according to prosecutor Jorge Nava López.