In this paper, I will examine the leadership and economic reward structure of Los Zetas. In the early 2000s, this organization dominated Mexico’s landscape as they fought the government and other cartels in bloody turf wars for control of Mexico’s extremely lucrative trafficking routes into the United States and Europe. I argue that the economic reward structure of Los Zetas, which highly valued displays of violence and built a brand of brutality, ultimately weakened their organization.
Founding of Los Zetas
To examine the Zetas’ founding, it is vital to first address its parent organization, the Gulf Cartel, or Cartel del Golfo. The Gulf Cartel is one of the oldest Drug Trafficking Organizations (DTOs) in Mexico, tracing its founding back to Prohibition in the United States, when the Gulf Cartel smuggled liquor. Utilizing vast corruption networks and smuggling contacts in Guatemala, Colombia, and Bolivia, the Gulf Cartel maintained their control over the Northeast of Mexico in the ensuing decades, evolving into one of the largest cartels focused on trafficking cocaine, heroin and marijuana.
In 1996, Osiel Cardenas Guillen, “The Friend Killer,” murdered one of his bosses and took the reins of the Gulf Cartel. Anticipating a power struggle and looming conflict, Guillen began building a private army. In the late 1990s, the Mexican Government began to take elevated notice of the violence caused by organized crime along the US/Mexico Border. The Secretariat of National Defense began to select and train Special Forces military units to combat the cartels. These units were trained in counter-insurgency operations in preparation for city combat against cartel gunmen. Even though they were members of the Mexican Military, many of these counter-insurgent troops were trained within the United States at Fort Bragg, GA.
The desertion of Mexican Federal troops into Los Zetas began with a Mexican special forces officer named Arturo Guzman Decena, “El Z1”. Guzman Decena was corrupted and received bribes from the Gulf Cartel for years, and when Guillen asked him in 1997 to build an armed wing for the Gulf Cartel, he handpicked 31 soldiers out of the Mexican Special Forces. This new armed wing of the Gulf Cartel, called Los Zetas, was tasked with several duties including the protection of Guillen, enforcing control of plazas, and carrying out hits. They were each tasked with bringing in and training more recruits (Grayson, 2). Propaganda efforts by Los Zetas focused on drawing in police officers and members of the Mexican armed forces, many of whom were easily won over by drastically better wages and opportunity for career progression. A narco-banner hung over a bridge in Reynosa, Tamaulipas in April of 2008 said:
“Grupo Operativo Los Zetas te quiere a ti, militar o ex militar. Te ofrecemos buen sueldo, comida y atenciones a tu familia. Ya no sufras maltratos y no sufras hambre. Nosotros no te damos de comer sopas Maruchan”.
“The Operations Group Los Zetas wants you, military or ex military. We offer a good salary, food, and will take care of your family. You will no longer be mistreated and will no longer go hungry. We won’t give you Maruchan (packaged noodles) to eat.” 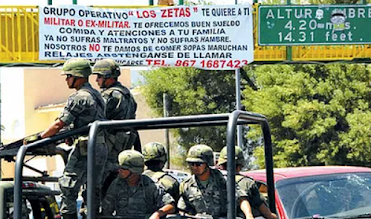