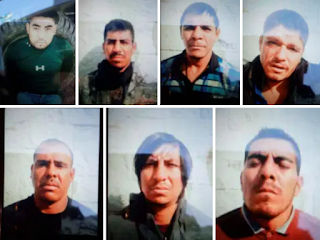 A group of 11 sicarios working for Los Chapitos were arrested following a shootout with the Mexican Army and the National Guard in San Luis Rio Colorado, Sonora, a municipality that borders the state of Baja California.

On Saturday, this armed commando attacked two homes located on Puebla and Tlaxcala Streets; one of them was owned by a former municipal police officer. After the shootout, the convoy fled to the desert but were followed by security forces and arrested after a short gunfight.

The 11 gunmen were placed under federal jurisdiction for carrying weapons considered of “military-exclusive” use, which if a violation of Mexico’s Federal Law of Firearms and Explosives. Authorities seized eight AK47 rifles, a Barret, a 7.62 Browning machine gun, a grenade launcher, and a M4 rifle.

As reported by Borderland Beat, Los Chapitos have been entering Baja California through the Mexicali and San Luis Rio Colorado plazas. Los Chapitos have an alliance with the local group Los Garibay and have been helping them wipe out the rival faction headed by Felipe Eduardo Barajas Lozano (‘El Omega’), a local drug kingpin. Los Salazar, a Sinaloa Cartel faction in Sonora, is also assisting Los Chapitos in this area.