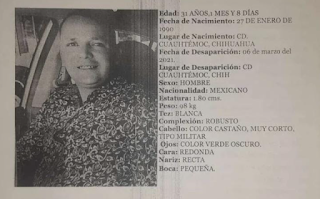 In the material released by an organized crime group, the agent talks about alleged complicities between the Cuauhtémoc Municipal Police and a rival cartel to his executioners

Before the municipal agent of Cuauhtémoc Miguel Ángel Ortega Gutiérrez was assassinated, they videotaped him revealing a series of complicities between the municipal corporation and a criminal group that operates in said municipality, revealing names and actions they take together.

The municipal agent was kidnapped on March 6, 2021 and despite the fact that an investigation was generated in the State Attorney General’s Office, a day later he was found dead on the road that leads to Anáhuac, where he was found with multiple firearm impacts in the head area.

On March 14, a video was released showing an alleged interrogation, where Miguel Ángel was on his knees, with handcuffs and beaten, where alleged members of the Gente Nueva del Tigre began to question him about his collaboration with the group La Línea.

In these videos, he revealed that he, as well as at least five officers of the Cuauhtémoc Municipal Police, were collaborating with the La Línea group, from whom they receive monthly payments of three thousand pesos, for alleged collaboration and protection that they provide from this corporation.

In the information that he revealed to the gunmen, there were three commanders of this agency, as well as agents, and even accused one of them of being responsible for being an intermediary to deliver the money that corresponded to them for complicity with said criminal group.

Apparently after the interrogation he was killed and abandoned on the road that leads to the Favela ejido, at kilometer 2, where he was found with multiple gunshot wounds, according to the corresponding report from the State Attorney General’s Office. .

Currently in that area of ​​the state, the State Attorney General’s Office has the corresponding information on the conflicts between two criminal groups that compete for control of the plaza.