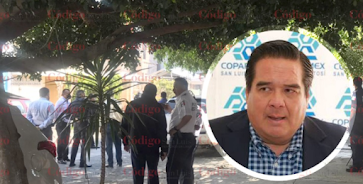 Julio César Galindo Pérez, the head of the Employers’ Confederation of Mexico (Coparmex) in San Luis Potosi, was killed by a lone gunman in broad daylight.

Local media reports say that Galindo Pérez was at a tire shop with his daughter when a gunman arrived and shot him three times. While he bled to death, his daugther desperately sought for help. Neighbors in the area called an ambulance and the police arrived in a matter of minutes to treat him. Galindo Perez died shortly after arriving at the hospital.

The San Luis Potosi Attorney General’s Office added that the police began with the proceedings to identify those responsible for the attack, while forensic experts work to gather evidences at the scene.

Since 2019, Galindo Pérez had been serving as president of Coparmex in San Luis Potosí. He was known as an important business leader due to his work in the automotive sector. In addition, he was also one of the most relevant political actors in San Luis Potosi.

As reported by Borderland Beat, San Luis Potosí has suffered the settlement of at least six cartels in the past few years. The state borders Nuevo León, Tamaulipas, and Veracruz, places where disputes between criminal groups have been a common occurence.

State authorities also link him to the murder of Luis Fernando Ibarra Peña, a police officer assigned to the Kidnapping Crime Attention Group in Hidalgo del Parral. The officer was killed last October. The suspect was reportedly a member of Gente Nueva, a group affiliated with the Sinaloa Cartel.