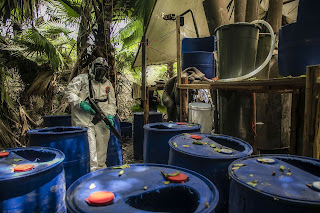 A top White House official told Mexican officials that key aspects of the two countries’ fight against drug trafficking aren’t working and that the U.S. is open to pursuing new strategies together, according to people familiar with the message.
Juan Gonzalez, senior director for the Western Hemisphere on the National Security Council, made the comments last week on a call between Mexican Foreign Affairs Minister Marcelo Ebrard and U.S. Secretary of State Antony Blinken, according to the people, who asked not to be identified because the conversation was private. Gonzalez said that the tactics used in recent years haven’t produced the results either side wanted and that they need to adapt to new challenges, the people said.
The comments provide a look into how the Biden administration plans to shift security cooperation with Mexico after the heavy-handed approach of former President Donald Trump, who called for the two nations to “wage war” on the cartels and considered labeling them terrorist groups.
The U.S. comments pleased the Mexican government, according to one of the people familiar with the conversation, who said it’s a significant change from the approach the U.S. has taken until now. Mexico has long argued that other aspects of the fight against drug trafficking need to be addressed, including tackling gun smuggling from the U.S., which the country argues fuels its deadly organized crime groups.
While it’s unclear how these remarks would translate into policy, Mexico could suggest that they either change or replace the Merida Initiative, an agreement signed in 2008 under which the U.S. has handed Mexico billions of dollars in security aid, said the Mexican official. In response to an e-mailed request for comment about Gonzalez’s remarks, the U.S. National Security Council’s press office said that strategies “must evolve just as criminal groups have evolved, and we should be willing to objectively evaluate our own approach.”

“Elements of the Merida Initiative as originally designed may not be effective for the challenges of today,” the NSC said. “We should be doing more to target money laundering, pre-cursor chemicals, the role of China in fentanyl trafficking through Mexico, as well as investing in economic opportunity and crime prevention.” The State Department declined to comment. Mexico’s Foreign Ministry didn’t immediately respond to a request for comment.

President Joe Biden has pledged to take action to curb gun violence. Democrats in Congress are reintroducing several gun control bills, including an expansion of background checks for purchasers. The Mexican official said a ban on assault weapons would be a crucial step. On the campaign trail in 2019, Biden promised to push for such a ban, though it would be difficult to pass in the Senate.

Mexican President Andres Manuel Lopez Obrador has taken a new direction in combating violence in the country, pushing to address the social causes of violence and arguing the country needs “hugs not bullets.” Homicides are still sky-high, hitting nearly 35,000 in 2019 and only falling slightly in 2020 amid pandemic restrictions.