Las Madres Buscadoras de Sonora Collective works in several municipalities of the Mexican State of Sonora. There are more than 4,000 missing persons registered in the state, but many of whom are not officially reported because families are afraid to report it, says Cecilia Patricia Flores, leader of the organization.

More than 400 bodies have been located and the “Searching Mothers of Sonora” group has delivered 132 living persons to their families in less than two years.

The mother who is looking for her son Marco Antonio Alejandro Guadalupe, who disappeared  in Sonora since 2019, pointed out that more and more women are joining the group since forced disappearances continue and so they continue with their work of locating their dear loved ones.

“Since we look for them, we have found more than 400 bodies in less than two years, we have not only found dead people who have been absent for more than 10 years, but we continue looking for our children who may be somewhere, we have found 132 people alive and given to back to their families ”, she explained.

CAUTION: Graphic Photos on Next Page 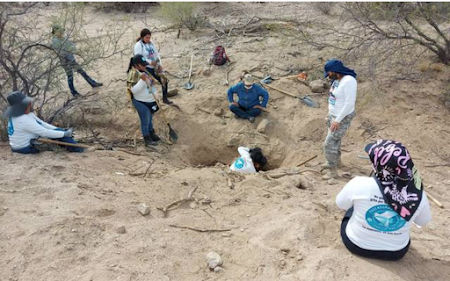 The activist mother affirms that many families have not made reports of their disappearances out of fear and called on the citizens to face their fears and report the missing.

“We are the voice of our disappeared, they were silenced forever but we were left alive to speak for them”

Last Wednesday, Las Madres Buscadoras, i.e. the Searching Mothers of  Sonora collective located a “well” with burning human remains in La Cuadrita de San José de Guaymas, along with more bone fragments burned and scattered on the ground around it.

In a garbage dump in the state of Sonora, the group of mothers, dedicated to searching for their missing children or relatives, came upon this illegal crematorium after noticing a smell of “burnt fat” in the vicinity. The finding was shared through their various social networks.

A clandestine grave with human remains that still burned was found on last Wednesday in the town of San José, in the Municipality of Guaymas, Sonora. Fire-fighters were called to the scene to put the still burning “well” completely out. 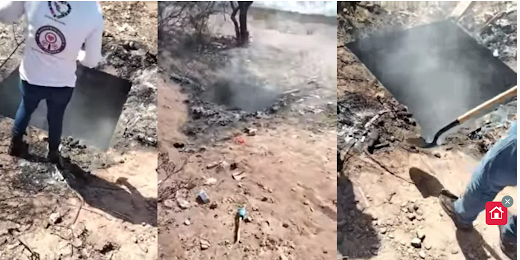 In a live broadcast on Facebook, this group of 200 people, who travel through the desert areas to search for the bodies of disappeared people , showed their finding in a vacant lot that serves as a garbage dump, where a dozen graves with more than 30 bodies have been located since 2018.

The members of the collective walk around the place and showed the improvised crematorium from which a smoke comes out. It is presumed that this well, more than one meter deep and was built by criminal organizations to dispose of their victims.

One of the women on record laments that she cannot extinguish the flames inside the pit because this could alter the crime scene. However, a man who accompanies her uses a shovel, manages to remove what would appear to be a piece of bone, but gives up due to the difficulty of the task without the use of special equipment. 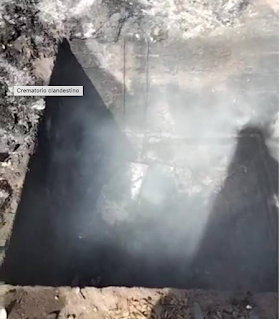 “It is a horrible despair, it is the worst thing I have ever experienced,” said Cecilia. “I have never seen anything like it. My pressure was lowered and I felt faint , it was very shocking and distressing to see the human remains exposed in a clandestine crematorium, ” she lamented.

In the videos shared and narrated by Cecilia Patricia Flores, representative of the group, a concrete well can be seen, just over a meter deep, with the walls black with smoke.

“In our search, today in San José de Guaymas, we found this well where, below, the bones are seen, many, many bones that are burned and that are still burning,” said the searcher, ” and we do not know what to do in this situation: we already spoke to 911, which is still conspicuous by its absence. We desperately want  to get something out of here ”.

This is not the first time that they have located skeletons in the same area, since on Sunday, April 11 and Sunday, March 28, they reported having located three clandestine graves and the remains of at least six people on the first day and nine other graves on the second. 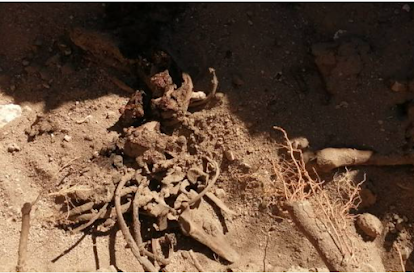 And last January, she reported the discovery of 19 clandestine graves with charred bone remains. These were located in the rural community of Ortíz and Esteban Baca Calderón.

The women reported that calcined bone fragments and percussion caps were found in at least 19 points in the desert area, so they assumed that some of the victims could have been executed in the same place.

Another group of women ” Colectivo Buscadoras por la Paz”, based out of Hermosillo, is constantly mounting searches. In the past couple of months alone, they also have found clandestine graves with multiple persons at each sight, along with one still smoldering clandestine “Crematorium”. This frightening discovery was also made in the countryside near Guaymas.

They have, especially and recently, been working near the rural community of Fructuoso Méndez where they have uncovered a total of 21 clandestinely buried human bodies. After official authorities removed the first 7 bodies, many more were uncovered due to the volunteers intense diligence. Fructuosa Méndez is on the outskirts of Hermosillo. 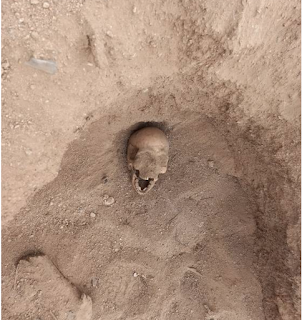 Mexico registered at least 2,000 clandestine graves between 2006 and 2016 with 2,884 bodies of people killed and buried by organized crime, revealed an independent journalistic investigation based on data from state prosecutors.

The report “Where are the Disappeared Going? ”, in which a group of Mexican journalists have worked for almost two years, indicates that the phenomenon of clandestine graves covers 24 states in the country and one in seven Mexican municipalities.

As for clandestine graves, in 2020 there was a 33 % decrease in these illegal burials, compared to 2019, according to Encinas, but these are “official ” figures and do not , in fact, reflect the reality on the ground. 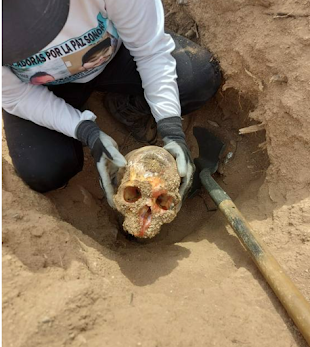 According to official figures, in Mexico there are 80,000 missing persons and 26,000 unidentified bodies in forensic services.

For anyone who wishes to connect, volunteer or has a loved one missing in this area, here are the links.