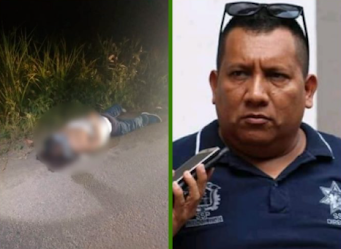 Filiberto Sangabriel Lozada, the former municipal police chief of Misantla, Veracruz, was found dead on the Nautla-Coapeche state highway. His body was found face down, handcuffed, and with bullet wounds. Reports say that Sangabriel Lozada was kidnapped last Tuesday outside of a business near the Misantla Technological Institute.
After the body’s discovery, elements of the Nautla Municipal Police took notice by cordoning off the corresponding area and requesting the presence of competent authorities to carry out the removal of the body. Minutes later, forensic specialists arrived at the scene and took the body to the local morgue.
It should be noted that Sangabriel Lozada resigned from the police force last January after his subordinate Baruch Pérez León was killed. Perez Leon was also kidnapped, tortured, and murdered by unknown assailants in Martinez de la Torre municipality. His murder remains unsolved.
The Jalisco New Generation Cartel (CJNG) and the Zetas Vieja Escuela (ZVE) operate in Misantla and its surrounding areas.
Borderland Beat analysis
Since the start of Mexico’s drug war, cartels have targeted and killed hundreds of local officials (including mayors and municipal police chiefs). Though the exact motives are often never officially determined, security experts agree that criminal groups sometimes seek to control local officials to expand their agendas in that area.
In addition, the increase in narcomenudeo, or street-level drug sales, has compelled some drug cartels to seek government tolerance or collusion whenever possible in order to operate in a certain turf. Municipal police forces are more likely to be aware of local extortions and drug sale spots, known in Mexico as puntos. Some local police officers are involved in these activities themselves.
That is not to say that every police officer killed in Mexico is corrupt. Law enforcement officers who pose an honest threat to a drug cartel and who refuse to collaborate with them are sometimes killed. Cartel members have also killed police officers in rival turfs to increase law enforcement crackdown. This is done to calentar la plaza (“heat up the turf”) of the locally-based cartel.
GRAPHIC IMAGE BELOW
Sources: Milenio; Diario de Xalapa; Eje Central; El Pinero; Versiones; Infobae; El Diario; Borderland Beat analysis