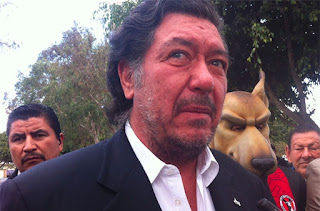 Baja California candidate Jorge Hank Rhon, who Governor Jaime Bonilla has alleged is a cartel crime boss in the state.

The governor of Baja California has made explosive allegations against one of the contenders for his job.

Morena party Governor Jaime Bonilla accused Jorge Hank Rhon, a gambling tycoon and former mayor of Tijuana who will represent the Solidary Encounter Party in the June 6 election for governor, of being the head of the Jalisco New Generation Cartel (CJNG) in the northern border state.

He described Hank as the biggest criminal Baja California has ever seen.

“I identify Jorge Hank as the head of this criminal group in the state,” he said in a live video message, adding that he believed that the 65-year-old is responsible for the high levels of crime in Baja California.

“I think that Jorge Hank has been behind all this, the high levels of crime and homicides in Baja California, for many years,” the governor said.

“… He is the true generator of violence. … The day Jorge Hank leaves Baja California, 80% of the violence will end because the violence arrived with him,” Bonilla said, apparently referring to Hank’s 2004–2007 term as mayor of Tijuana.

The governor, who took office in November 2019 and attempted to extend his term from two years to five, cannot stand for reelection this year.

The governor accused Hank of having told the presumed criminals what to say.

“[He is] a person who has stolen everything from the people,” he said, adding that the candidate’s deceased father, Carlos Hank González — a former governor of México state, mayor of Mexico City and a federal minister — did the same.

“The other day he was boasting that he was a very rich man and didn’t need to enter government to steal. We would have thought the same about his dad, but he was in government and he stole,” Bonilla said.

Morena’s candidate, Marina del Pilar Ávila Olmeda, who is a former mayor of Mexicali, is considered the favorite to win the June 6 election. Some polls indicate that Hank is the second-most favored candidate.