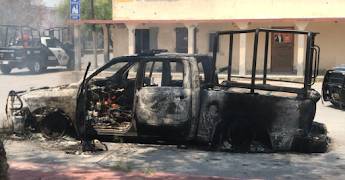 Members of the National Guard (GN) were ambushed by suspected cartel members in Los Aldamas, a municipality in Nuevo Leon and close to the highly cartel-contested area in Tamaulipas known as La Frontera Chica. Early reports say that one officer was killed and at least 10 more were wounded.

Pictures of the attack were shared by users on social media after the shootout was over. In one of the images, a vehicle from the GN is seen completely destroyed from a fire.

Authorities said that the attacking group used 16 armored vehicles when they attacked the GN convoy. According to local media, the detonations caused scenes of panic among the population, and several businesses closed their doors to prevent being caught in the crossfire.

During the shooting, the officers requested more reinforcements from the GN and the Nuevo Leon State. It is unknown if anyone was arrested in the aftermath of the attack. The injured elements were transferred by helicopter to receive medical attention.

Photographs posted on Twitter show that one of the pickup trucks used during the attack had the insignia “Tropa del Infierno” (Troops From Hell) and “Cartel del Noreste” (CDN).

This past weekend, a clash between members of the Gulf Cartel (CDG) and the CDN left up to 10 dead in Camargo, Tamaulipas, about an hour drive from Los Aldamas.

Los Aldamas is located approximately 160 kilometers (100 miles) from Monterrey, the largest urban area in northern Mexico. This town is on the highway that connects Monterrey with Miguel Aleman, Tamaulipas, just across the US-Mexico border from Roma, Texas.

The shootout occurred close to La Frontera Chica (also known as La Ribereña), a border stretch in Tamaulipas. In the context of the Mexican Drug War, it is a lucrative drug corridor currently under dispute by the Metros faction of the CDG and CDN.

The CDN, based in Nuevo Laredo, is trying to expand east into La Frontera Chica, which has historically been controlled by the CDG.

The CDN has tried to make incursions into La Frontera Chica from Nuevo Leon. It is likely that this shootout in Los Aldama may be a result of a CDN cell that was planning to push north into Tamaulipas.

The CDG commanders in the area are Cesar Morfin Morfin (“El Primito”) and his brother Alvaro (“R-8″). As reported by Borderland Beat, CDG in La Frontera Chica has the backing of the Nuevo Leon cell reportedly headed by Comandante Cubano.