The year-long, multi-agency investigation led to the seizure of 14 firearms and more than $400,000 worth of drugs.

The Madera County Narcotic Enforcement Team announced on Monday the takedown of a large drug trafficking operation that was based in tiny La Vina, a farming community of less than 300 in the southwest part of the county.

Operation Crystal Vine was launched in July of 2020 by the Madera County Narcotic Enforcement Team.

The ring was led by Juan Jimenez along with his wife, Maria Hidalgo, and son Alexis “Nessy” Jimenez, who are three of 38 individuals arrested in the case.

The operations resulted in the seizure of 18 pounds of methamphetamine, more than 60 grams of cocaine, 3.7 pounds of heroin, nearly 25 pounds of marijuana, 64 grams of concentrated cannabis and 3,400 fentanyl pills.

“They actually were burying large quantities of drugs, which made it extremely difficult to conduct this investigation,” Pogue said. “They went to great lengths to make sure that they were not discovered.”

“We basically decimated one gang,” says Madera County District Attorney Sally Moreno. “Arrested most of the members of that particular gang and then some of the dealers that we arrested are receiving drugs directly from larger cartel dealers.”

There also were 14 firearms recovered through an investigation that started in July 2020 and was dubbed Operation Crystal Vine, the largest gang and narcotics investigation conducted by the Madera County Narcotic Enforcement Team in more than a decade. 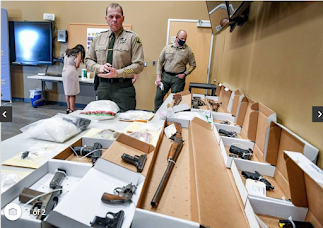 “Detectives learned that Juan Jimenez was procuring narcotics from Mexico and distributing them throughout the state of California,” Madera County Sheriff Tyson Pogue said.

“Alexis is a documented gang member with a violent history that includes assault with a firearm. Our investigation uncovered that this family used various gang members to distribute the guns and drugs throughout the county of Madera and the state of California. Throughout the investigation, electronic intercepts were implemented to help determine when the drugs were being transported. Nearly a dozen traffic stops were orchestrated during this operation yielding the seizure of sizable amounts of various drugs.”

The arrests in the case have produced a number of felony and misdemeanor charges including conspiracy, distribution of controlled substances, firearms offenses and assaults.

Juan Jimenez, 47; Hidalgo, 48; and Alexis Jimenez, 24; all have been arrested on the following felony charges:

Three counts each of conspiracy

Juan Jimenez is also charged with additional felony counts of being a felon in possession of a firearm and committing a felony while released on bail.

“I just want to remind everybody how serious the charges in this case are,” Madera County District Attorney Sally Moreno said. “These are serious allegations that these 38 and more individuals are dealing drugs and acting as violent gang members in our community.

“As the cases come over to our office, you can be assured that we will do everything in our power to serve justice and to make sure we keep Madera County as safe as we possibly can.”

Moreno says while the arrests are good news for many impacted California cities, the impact will be deeply felt most deeply in La Vina.

“The vast majority of individuals came out of that community, so that community that was dealing with that surge of drug dealing, gangs, guns and violence will hopefully get respite from these arrests,” she said.

Gang members who were arrested as a result of the operation will face additional gang enhancement charges. More arrests are expected to come. 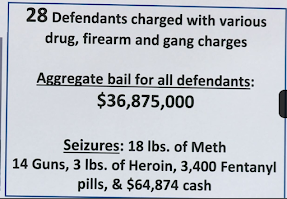 The investigation was started after an increase of criminal activity in La Vina, Pogue said, and it found Jimenez was acquiring methamphetamine, heroin and cocaine from Mexico and various sources, and distributing the drugs throughout various locations in the state.

“Fairly far north all the way down to the border,” Pogue said.

Starting on April 5, the Madera County Narcotic Enforcement Team served 12 search warrants in Fresno and Madera counties including one at the Jimenez residence in the area of Avenue 11 and Road 23 in La Vina, where a number of coolers were found. Detectives believe the coolers were used to hide guns and drugs that had been buried on the property, the group, Pogue said, went to great lengths to conceal their activity.

“This is a tremendous day for public safety in Madera County,” the Madera County sheriff said. “The substantial seizure of drugs and firearms will no doubt make a significant positive impact on the safety of our communities. We’re thankful for the collaboration between our allied agencies to successfully navigate and continue this investigation.”

Three Fresno men and 10 others are accused in a drug-trafficking operation that spread into several states, the U.S. Attorney’s Office said Friday.

If convicted, the suspects face a mandatory minimum penalty of 10 years and up to life in prison and a fine of up to $10 million.