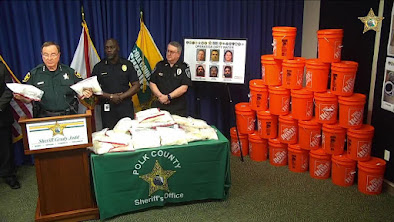 ‘Operation Dirty Water’ Arrests and Seizure of over $50 Million Worth of Meth Linked to Juarez Cartel
More than $50 million worth of methamphetamine linked to the Juarez Cartel was seized during a joint drug investigation between the Polk County Sheriff’s Office High Intensity Drug Trafficking Area Task Force (HIDTA) and the Department of Homeland Security Investigations (HSI).
“Operation Dirty Water” started after a parcel shipped from Quebec, Canada containing approximately 2,500 Xanax pills was intercepted by investigators on January 14. After the parcel was intercepted, the Polk County Sheriff’s Office, according to a press release, conducted a controlled delivery to a home in Winter Haven. The delivery resulted in 37-year-old Amber Cayson being arrested, and 24 pounds of THC edibles, 2.4 pounds of marijuana and a pound of meth being seized. 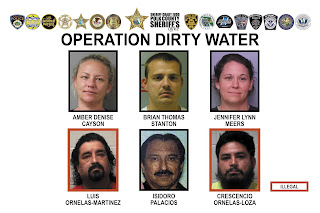 Detectives said as they continued their investigation, they learned the suspected drug trafficker was 37-year-old Brian “Lil B” Stanton, an inmate in the United States Federal Penitentiary in Atlanta, Georgia. Stanton, according to the release, arranged the sale and delivery of meth in Polk County.
On March 13, Stanton had 43-year old Jennifer Meers, a woman from Stone Mountain, Georgia who is on federal probation for drug trafficking, deliver a suitcase carrying 26 pounds of meth to an undercover detective at a hotel in Lakeland. Six days later, Stanton arranged for Meers to deliver another 35 pounds of meth.
On March 30, undercover detectives with HSI and PCSO arranged to pick up the drugs from Meers’ truck near where she worked in Atlanta. According to the release, when they got the drugs from Meers’ truck they also found luggage with 16 vacuum-sealed bags containing meth.
During a traffic stop, “a short time later,” Meers was arrested on a Polk County Sheriff’s Office warrant by the Sandy Springs Georgia Police Department. After being arrested, Meers told detectives during an interview that Stanton would coordinate the delivery of the meth and pay her $500 for every kilo (2.2 pounds) that she delivered. Meers’ arrest, according to the release, led investigations to the location of three meth conversion labs in Georgia. This in turn led to three arrests and 1,416 pounds of crystalized and liquid meth being seized. 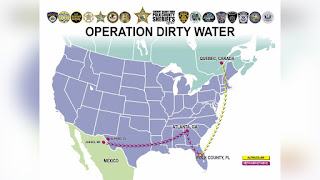 Operation Dirty Water Exposed a Trafficking Network In Juarez, Florida, Georgia, and Quebec.
HSI investigators said they have associated this illegal drug trafficking organization with the Juarez Mexican Cartel, a brutally violent cartel known for its targeted executions and violence.
“Some people still call this low-level, non-violent drugs. These drug dealers have blood on their hands. They make money off the misery of others. They use violence as a means to enforce their trafficking business. We seized 20 firearms during this investigation, including rifles, shotguns, handguns, and three stolen guns. Methamphetamine destroys lives, degrades communities, and ruins families. Through our partnership with Homeland Security and law enforcement agencies in Florida and Georgia, our detectives took a huge amount of meth off the street and shut down an active drug trafficker operating out of a federal prison,” said Polk County Sheriff Grady Judd.

Those arrested on Polk County charges are:

30-year-old Crescencio Ornelas-Loza who resides in Fairburn, Georgia was arrested by the Henry County Police Department. He is in the United States illegally. Ornelas-Loza is charged with theft by receiving stolen property. His criminal history includes 4 arrests in Georgia. Three for driving without a valid license and one charge for theft by receiving stolen property.
50-year-old Luis Ornelas-Martinez was arrested by HSI agents and the Henry County Police Department at his residence located on 321 ASA Moseley Road in Stockbridge, Georgia. Ornelas-Martinez is in the United States illegally and is charged with manufacturing methamphetamine and possession of a firearm while in the commission of a felony. His criminal history includes 2 arrests in Georgia with charges of trafficking in cocaine, illegal drug possession, possession of methamphetamine with intent to distribute, and driving without a valid license.
59-year-old Isidoro Palacios was arrested at a methamphetamine lab located at 5359 Stonewall Tell Road in College Park, Georgia. HSI agents and South Fulton County Police Department arrested Palacios and seized 77 pounds of methamphetamine, a stolen vehicle, and a stolen shotgun. Palacios is charged with trafficking methamphetamine, theft by receiving stolen property, and animal cruelty (stemming from the illegal rooster fighting ring). He is currently in Fulton County Jail with a $100,000 bond. His criminal history includes 11 arrests in Georgia to include charges of DUI, trafficking in methamphetamine, willful obstruction of law enforcement, and driving without a license. Palacios has also been arrested in Florida three times for driving without a license.

For a full breakdown of the other related arrests and charges, click here. 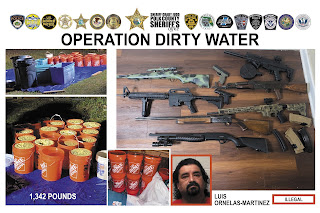