The meeting took place inside the high-security module known as Diamante of the Santa Martha Acatitla Men’s Social Reintegration Center.

Gómez Trejo arrived at this prison in Mexico City at approximately 10:00 a.m., aboard a white truck, and was received by the prison director, César Abraham Flores Sandoval, and left minutes after 4:00 p.m.

This was the second visit made to El Cuini by the prosecutor for the Ayotzinapa case, since a few days ago he had also gone to this penitentiary, according to prison records.

When meeting with the official, González Valencia demanded the presence of Alejandro Encinas, undersecretary of Human Rights, Population and Migration of the Ministry of the Interior since, he said, he had agreed to meet with that official.

“In that meeting, the first thing the accused asked was whether Alejandro Encinas was present since he had agreed to have a meeting with the Undersecretary of the Interior; however, the federal official did not attend, an agreement was again set for Wednesday, May 12,” commented an official from the Ministry of the Government of the capital.

Also present at this first meeting was Félix Santana Ángeles, who identified himself as one of El Cuini’s lawyers and presented a credential from the Ministry of the Interior, with expired validity, to be able to enter the Diamond module.

Abigael González Valencia has negotiated with federal authorities to provide data that, presumably, will clarify the disappearance of the 43 Ayotzinapa students. Alejandro Encinas notified, on April 8, the Secretariat of Security and Citizen Protection (SSPC) that El Cuini was collaborating with testimonies of high value for the Ayotzinapa case. 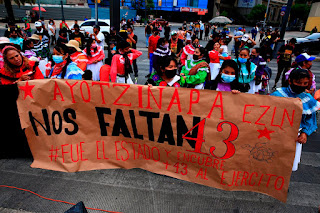 Although municipal and federal police and Army agents participated in the events, it has been reported that the youths were handed over to members of Guerreros Unidos, mistaking them for their rivals from Los Rojos. Supposedly, the information that González Valencia would offer was gathered for several months by CJNG forces.

El Cuini complained of mistreatment inside of Altiplano prison in the last six months.

El Cuini is a former leader of the criminal group Los Cuinis, a clan of at least 18 siblings who reportedly manage the money laundering networks of the CJNG. Along with his brother-in-law Nemesio Oseguera Cervantes (alias “El Mencho”), El Cuini reportedly coordinated international drug trafficking operations in the Americas, Europe and Asia. He was also responsible for managing the financial operations of the CJNG and Los Cuinis.

He worked for the Milenio Cartel in the 1990s and eventually formed part of the original group that founded the CJNG in the 2010s.

González Valencia was transferred from the Altiplano federal prison to Mexico City, as reported by Borderland Beat, between Saturday night and early Sunday morning. The petition was made by the Commission for Truth and Access to Justice in the Ayotzinapa Case, headed by Alejandro Encinas, as well as Omar Gómez Trejo, prosecutor of the Special Investigation Unit for this event.

According to prison sources, the transfer of El Cuini took custody personnel by surprise, since there was no legal justification for his arrival; however, from that day on, a surveillance fence with soldiers and agents of the Metropolitan Police of the Secretariat of Citizen Security was set up at the entrances to that prison, which remained until yesterday.

According to police reports, on May 12 there was a presence of 27 elements of Sedena and a command.