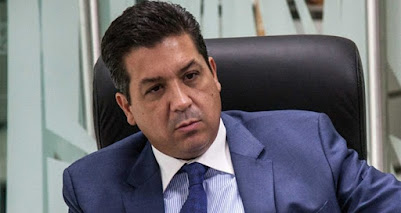 Before the Chamber of Deputies approved the ruling to impeach the Governor of Tamaulipas, Javier Francisco Cabeza de Vaca, fled to the United States.

He is charged with tax fraud, money laundering and organized crime.

However, the Tamaulipas Congress declared the measure “inadmissible”, so the National Action Party (PAN) will remain in office. He will face the charges when he leaves, in late 2022.

Friday, during  the plenary session, where Morena Party has a devastating majority, the governor was without jurisdiction and could be arrested in the last hours.

The Congress of the State of Tamaulipas determined that the violation of the governor of Tamaulipas, Francisco García Cabeza de Vaca, does not proceed, so he will not have to face the accusations that are imputed to him until he leaves office in October 2022, after an  extraordinary session was held and the decision taken by the Chamber of Deputies.

For this reason, and after meeting with some deputies and advisers from his inner circle, Cabeza de Vaca took a private flight from Ciudad Victoria to McAllen, Texas, where he has one of his residences.

According to the website La Política OnLine, the PAN governor traveled with his wife and at least four of their seven children. The residents of the subdivision affirmed to this medium that they saw him arrive at his home  in McAllen, Texas.

The legislators determined that the PAN president partially issued the payment of federal taxes, to the detriment of the treasury for more than 6.5 million pesos. 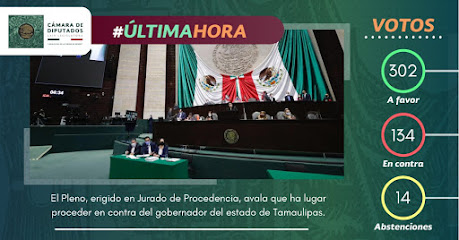 With 302 votes in favor, 134 against and 14 abstentions, the Chamber of Deputies determined that there is sufficient evidence to withdraw the constitutional jurisdiction from the governor of Tamaulipas, Francisco García Cabeza de Vaca, which will remain at the disposal of the authorities judicial.

After six and a half hours of discussion, the parliamentary majority of Morena and his allies decided to withdraw the procedural immunity from the president and communicate the resolution to the local Tamaulipas congress to act accordingly. After the vote, the president of the Board of Directors, Dulce María Sauri (PRI), declared that “there is room to proceed against” the governor.

The Institutional Revolutionary Party (PRI) deputy ordered to communicate the resolution to the State Congress, “for the purposes of the fifth paragraph of Article 111 of the Constitution.” Said paragraph provides that “to proceed criminally against state executives … the declaration of provenance will be for the purpose of communicating it to the Local Legislatures, so that in the exercise of their powers they proceed as appropriate.”

Although the Office of the Attorney General of the Republic accuses him of the crimes of organized crime , operations with resources of illicit origin and equal tax fraud, the deputies only concluded that there was a difference between his income declared during 2019 before the Tax Administration Service (SAT) and the ones you actually got.

“For this reason, the taxpayer partially issued the payment of federal taxes, obtaining with said action an undue benefit for himself and to the detriment of the treasury in the amount of 6 million 511 thousand 777.57 pesos”, states the opinion endorsed by the legislators.

García Cabeza de Vaca did not attend the Chamber of Deputies and his legal representation, the lawyer Alonso Aguilar Zínser, appeared remotely, since the session was blended.

Since last year, it emerged that the Specialized Office of the Investigation of Organized Crime (SEIDO) of the Attorney General’s Office (FGR) investigated the governor after obtaining telephone audios obtained by the United States Drug Enforcement Administration (DEA).

The process initiated by the Attorney General’s Office (FGR), part of a complaint from the Financial Intelligence Unit (UIF), which accused the governor of having simulated the sale of a luxurious apartment in Santa Fe, Mexico City, for 42 million pesos as part of a money laundering scheme .

To carry out this transaction, García Cabeza de Vaca allegedly received 14.3 million pesos from a financial company, which in turn obtained the resources of two shell companies that served the Sinaloa Cartel to “launder money.”

In Defiance: ”This is a blow to democracy”: says Cabeza de Vaca

After all the lawlessness, García Cabeza de Vaca accuses Morena of hurting democracy.

Through a video published on social networks, the governor of Tamaulipas described his violation as a “blow to the Constitution and democracy, but, above all, to federalism.” See Twitter video below.

He assured that the purchase-sale transaction of an apartment, for which he is accused of evading taxes , was lawful, and that the taxes were duly declared and paid. He added that his heritage “is the result of a lifetime of personal and family effort.”

“My complainants have gone to the extreme of falsifying and manipulating evidence in order to reverse the democratic decision of the people of Tamaulipas,” he said.

“This outrage is not about links with organized crime, as has been falsely spread, nor am I accused of agreeing, protecting or letting a criminal or a capo flee,” he said. “They do not accuse me of having appropriated public resources for my own benefit or that of my family, I have not been called to account for disobeying a law or any judicial order [...] but for not paying taxes.”

He added that the Constitution establishes that the Federal Chamber of Deputies cannot , by itself, disqualify any local official, since that power was ultimately completed by the local Congress, “for the simple reason that local power emanates from the popular sovereignty of the states that make up the federation ”.

“My sense of dignity and the defense of the free will of the citizens of Tamaulipas does not allow me to submit to this hoax,” he stressed.

During his speech, the PAN governor quoted President Andrés Manuel López Obrador, repeating a phrase he uttered during the process of his impeachment when he was head of the Federal District Government:

“The fraud and bad faith is of whoever accuses me of those who accuse me. I have a clear conscience for many years that I fought for my ideas and I do so attached to principles, one of these is precisely to speak the truth and conduct myself with righteousness. I have the absolute certainty that I am not being judged for breaking the law but for my way of thinking and acting and for what I can represent together with other Mexicans for the future of our country. “ 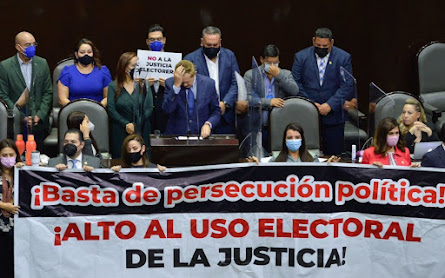 In the first part of the special session, the prosecutor of the FGR, Elizabeth Alcantar Cruz , affirmed that the defendant bought companies, restaurants, art galleries, ranches, residences and bank accounts from 2005 to 2019; the total equity is valued at 951 million pesos.

Later, the official argued that the president formed an organization and designed a scheme that, supposedly, configures the crimes of organized crime and money laundering. Alcantar Cruz pointed out Juan Francisco Tamez Arellano, shareholder and representative of the company T Seis Doce; Baltazar Higinio Reséndez, owner of the construction companies Inmobiliaria RC Tamaulipas and Barca de Reynosa; and the leading company Productora Rural y Agropecuaria Regional Cava, as the main beneficiaries of the alleged network.

In response, the governor’s attorney, Alonso Aguilar Zinser, questioned whether the members of the body have reviewed the evidence presented by the governor and his wife. In addition, he said, the couple paid the respective amounts of the Income Tax for the sale of the department in Bosques de Santa Fe for 42 million 113 thousand 844 pesos,

The lawyer acknowledged that T Six Doce, purchaser of the luxury property,  deposited the entire purchase price in the account of the Tamaulipas president, by agreement of the García Gómez couple. However, he added, in subsequent days 20 million 907 thousand 418 pesos were transferred to Mariana Gómez Leal.

Alonso Aguilar pointed out that the Federal Prosecutor’s Office filed a complaint when it saw the deposits in the PAN’s account, but that this action occurred because it was unaware of the purchase agreement. It also stated that the Section received 21 documentary evidence, among them the fiscal records of the annual returns. Of this, he specified, the couple reported their income on April 30, 2020 to the Tax Administration Service (SAT). These documents were provided on the night of April 27, 2021 to the legislative branch. 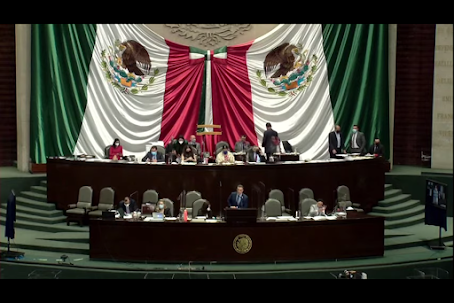 The deputy of Morena and president of the Investigative Section, Pablo Gómez Álvarez, considered that there are not sufficiently strong elements to consider that resources that came to the power of the accused were clearly the product of crimes ; however, it cannot guarantee that it is not.

The coordinator of the PAN Parliamentary Group, Juan Carlos Romero Hicks, described the violation of the Tamaulipas governor as “a factious act” for electoral purposes , which “is handled at a whim by the Presidency of the Republic.”

As for his benchmate, Elías Lixa Abimerhi, the session of the Chamber of Deputies where he stands as Jury of Origin “is an electoral circus set up by Morena and the ruling party of the Federal Government.”

“This is merely a matter of election and convenience,” he stressed.

In response, the Moreno deputy, Sergio Carlos Gutiérrez Luna, maintained that the PRI, PAN and Party of the Democratic Revolution (PRD) benches intend to return to “the practices of the past”, by opposing the process of lawlessness against the PAN president.

Gutiérrez questioned the moral authority of the opposition over the innocence of Francisco Javier García Cabeza de Vaca, governor of Tamaulipas, and accused it of trying to perpetuate a corrupt elite that only promotes their private interests over those of the people of Mexico. 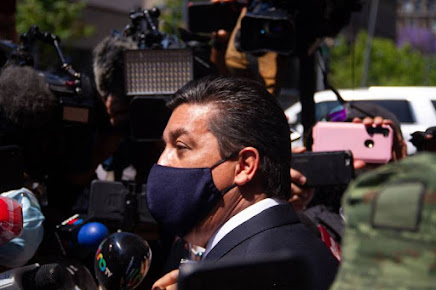 “He’s emaciated, he’s lost about 10 kilos and he’s full of nervous tics. His hand trembled when he grabbed a glass of water, ” said one of the men who saw him this afternoon, before he left Mexico, told La Política OnLine.

In the National Palace, they are aware of Cabeza de Vaca’s departure from the country, and they begin to believe that he will no longer return to Mexico.

“It is quite usual for the governor to spend the night in McAllen, but it is very suggestive that he left just when he is about to lose his privileges,” analyzed a source from Palacio.

In Morena they affirm that the pressure from the Cabeza de Vaca operators forced the removal at the last minute of a Labor Party (PT) deputy – Ana Ruth García Grande – who was reluctant to vote in favor of the violation.

Friday was the key day for Cabeza de Vaca. Will he appear in public to confirm that he will face the process in Mexican territory or will he begin his fugitive stage from his opulent mansion?

NOTE: For those interested in Videos of the actual legislative session there are several YouTube videos on the Aristegui link below.
Sources: Aristegui / Financiero / LaPoliticaOnline / Informador