Warning: All pictures of the corpses in this article are blurred but some may find them disturbing. Viewer discretion is advised. 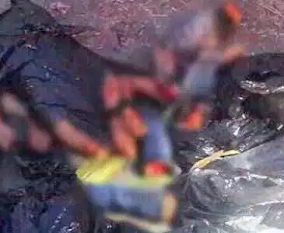 Violence in the state of Michoacan is not only high but often merciless. Over the weekend, authorities discovered 5 dismembered bodies inside plastic bags in Zamora municipality, close to the border with Jalisco.

The events occurred at approximately 7:00 am this Saturday when the residents of Tierras Blancas rural community located the bags with the remains and notified authorities. The police arrived at the scene and requested the support of forensic specialists to help identify the bodies.

The remains were transferred to the Forensic Medical Service (Semefo) and remained unidentified by press time.

In a separate incident in Uruapan municipality, sicarios hijacked several transport vehicles and burned them in at least five different points of the city. The attacks were reported at around 11:00 a.m. on Saturday in a highway leading to Paracho municipality. These incidents caused traffic to worsen and a large mobilization from security forces.

The National Guard (GN) and the Michoacan State Police were deployed and arrested two suspects who participated in the attacks.

Cartel members carry out car hijackings and block roads for a number of reasons, including to prevent authorities from arresting a high-profile figures, to prevent them from mobilizing across the city comfortably, and/or to stop an operation in its tracks by distracting them with these attacks, among other reasons. No authority has issued a statement as to why these attacks occurred.

In the last few months, violence in Michoacan has increased with the dispute between the Jalisco New Generation Cartel (CJNG) and Carteles Unidos (CU). Most of the violence has been in or around Aguililla municipality.