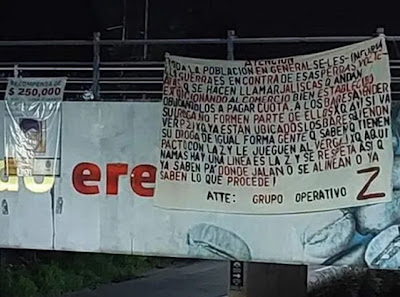 On the morning of Monday, July 5 2021, three  narco-banners with threatening messages appeared on the main bridges in the municipalities of Fortín de las Flores and Córdoba in the state of Veracruz.

The three banners, written in black and red letters, were placed in the area of the Revolución market, the Prosperidad bridge, and on Córdoba-Fortín boulevard. The narco-banners warn the public about the war against the Jalisco Nueva Generación Cartel (CJNG) operating in the area. The banners are signed by Grupo Operativo Z.
The banners were seized by officers and taken to the police facilities in the Santa Cruz Buena Vista neighborhood of Cordoba, in order to carry out the corresponding criminal report. The evidence will later be handed over to the State Attorney General’s Office. 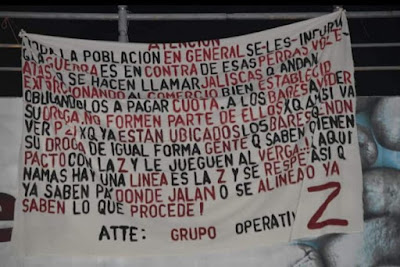 The banners read as follows:

To all the population in general, we want to warn you about the wars against these gangs that call themselves Jalisco. Or those who go around extorting the well established commerce, forcing them to pay a fee to the bars in order to sell their drugs.

Don’t get involved with them because you’re going to have serious problems with us if you do. The bars that don’t sell their drugs are already located. The same goes for everyone who knows that have made an agreement with the Z and decide to risk it.

There is only one direct line here and it belongs to the Zetas. And it will be respected. Therefore everyone should already know which direction they should go in. Fall into formation. Otherwise you know what’s next.

Of note, a very similar narco-banner message appeared in this same town of Córdoba, Veracruz in April 2020 which read:

The Gulf Cartel and Zetas Vieja Escuela are here, the plaza has an owner and we are coming for you. The hunt is on for the new generation Jalisco, the hunt has begun.

This narco-banner might suggest that within the last few years, the Gulf Cartel, Zetas Vieja Escuela and the CJNG have a presence within the general Córdoba, Veracruz area.