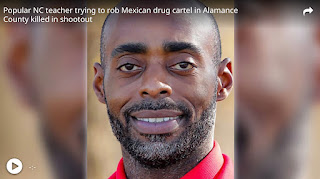 A popular Union County teacher described by family and friends as a devoted father, teacher and coach was fatally wounded in a shootout when he and his brother-in-law tried to rob members of a Mexican drug cartel. Reported by our news partner, ABC11. By ABC11

The U.S. Marshals Service charged a man Monday with the murders of two men — including a popular Union County teacher — three months ago during a shootout involving alleged members of Mexican drug cartel.

Gar-yon-ded-weh Stepney, 41, is being charged with first-degree murder for shooting both Barney Dale Harris, 40, and Alonso Beltran Lara, 18, on April 8 in Alamance County.

Marshals found Stepney in Greensboro, where he was arrested and transported to the Alamance County Detention Center, according to the Sheriff’s Office.

Stepney hasn’t received bond, and he will be taken to a district court judge on July 20 for a bond hearing.

Harris was a Spanish teacher and head boys’ basketball and track coach at Union Academy Charter School in Monroe.

The incident happened around midnight on Wyatt Road in Green Level — a town 55 miles west of Raleigh and 115 miles east of Charlotte.

Harris and his brother-in-law, Steven Alexander Stewart Jr. of Wadesboro, were allegedly part of one of the enterprises.

The two men were attempting to rob Lara, who Johnson described as a drug runner for the Jalisco New Generation Cartel, for drugs and money.

Lara was forced outside, bound by his feet and shot twice in the head “execution style,” according to Johnson.

A bag containing 1.2 kilos of cocaine (about 2.6 pounds), about $7,000 in cash and five guns were found at the scene, according to the Sheriff’s Office. 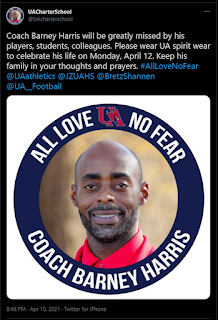 Union Academy Charter School in Monroe, NC, posted tributes, like this one, to Barney Harris after the popular Spanish teacher and basketball coach died on April 8, 2021. The posts disappeared on April 14 after the Alamance County Sheriff’s Office said Harris died in a shootout with members of a Mexican drug cartel.