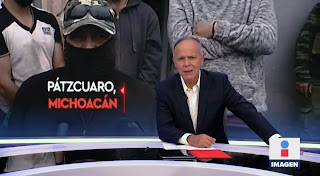 Ciro Gómez Leyva: At the beginning of this program, we were showing you these images of an assembly of self-defense groups calling themselves the self-defense groups of Pátzcuaro. They are doing according to them what the police should be doing. They arrest alleged criminals and hand them over to the Public Ministry of Michoacán. The following took place at midday today.

Pueblos Unidos # 1: Today we come to put 3 people at the disposal of the Prosecutor’s Office for poisoning society. They are traffickers of crystal meth. We have a little more than a quarter here, about a pound of this narcotic.

Unfortunately, we are upset with the government at this moment. We’re being told that they can’t arrest them.

Pueblos Unidos # 2: We’ve brought the evidence here so that you can see that we only work against those who do wrong. And I think that the majority of people do know this type of drug known as crystal meth.

Try to imagine just how many youth they poison with this type of drug. Unfortunately it’s not enough for the law, for the prosecution to make itself available, all this evidence isn’t enough. I don’t think I know what was required for him to act.

Ciro Gómez Leyva: The Michoacán Prosecutor’s Office informed us that he couldn’t receive these 3 individuals because the amount of drugs that they seized was too much. And that this is a matter for the Attorney General’s Office.

The reporters who were there in Pátzcuaro asked these men who call themselves Pueblos Unidos what their intentions are. And this is what they answered.

Pueblos Unidos # 2: We have been working with a low profile without making much of an appearance so as not to affect tourism.

Pueblos Unidos # 1: They told us that we will support each other. And those individuals who claimed they’d support us are already integrated into Pueblos Unidos. Honestly they make up around 200 members.

Pueblos Unidos #2: Every citizen who works for a living, who works honestly won’t be bothered for any reason. Obviously I know that not all the townspeople will be in agreement with our actions.

Because many of them have family members or friends who are dedicated to these types of illicit affairs. So, it’s just not convenient for them. Naturally everyone who is doing something wrong will be throwing dirt against us. For this reason they know that they will no longer be able to extort or kidnap anymore. Their little gold mine has now come to an end with us.

Ciro Gómez Leyva: So, what exactly became of the 3 men that had drugs in their possession and were being detained since yesterday? Today they took them before the Public Ministry.

The fact is that these armed groups are taking upon themselves capabilities that they legally don’t have. And once they arrive before the Public Ministry with their detainees they are unsuccessful in their actions, their prisoners are not officially processed into the legal system.