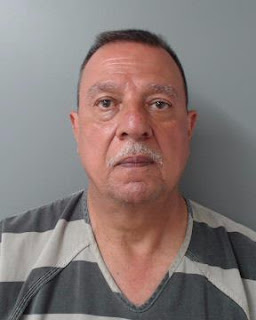 Texas Department of Public Safety troopers seized more than $380,000 and arrested one man in connection with the case.

Hugo Alfredo Mendoza-Martinez, 65, of Katy, was arrested and charged with money laundering. Webb County Jail records show he is out on bond.

As part of Operation Lone Star, a trooper overheard Laredo DPS communications broadcast to be on the lookout for a white 2011 Buick Enclave possibly transporting a large amount of money from San Antonio.

A trooper observed the vehicle traveling south on mile marker 68 of Interstate 35 in La Salle County.

Trooper pulled over the vehicle for failure to signal a lane change. DPS identified the driver as Mendoza-Martinez. Asked if he had drugs, guns or large sums of money, Meondoza-Martinez stated he only had $2,300 in his baggage.

He allegedly allowed troopers to search his vehicle but denied consent for his cellphone. A K-9 inspection of the vehicle allegedly resulted in a positive alert.

Mendoza-Martinez agreed to have DPS take the vehicle to the U.S. Border Patrol checkpoint on Interstate 35 for an X-ray scan.

Further inspection of the vehicle with the assistance of Border Patrol yielded a “well-constructed compartment,” states the affidavit.

“The compartment had a trap door that was covered with Bondo and painted to match the vehicle’s original paint,” states the affidavit.

Troopers then discovered bundles of cash inside the compartment. The cash seized was $389,620, according to DPS.

“The currency was secured in bundles wrapped in tape with numbers written on them. This is common method used by drug trade organizations for transporting illicit proceeds,” states the affidavit.