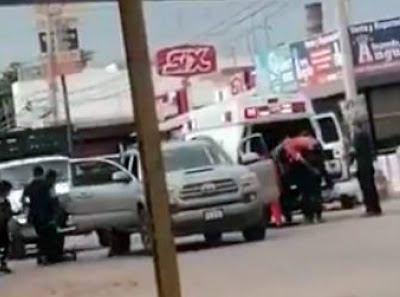 At around 5:00 pm on Tuesday, July 13, 2021, there were multiple reports received by the El Tepuche, Sinaloa receivership of shootouts occurring the in the area of Tecolotes. At least one of the reports alleged that they saw over 50 men had died in the violent confrontations.

State police officers along with Army (SEDENA) and National Guard soldiers traveled to the town of Tecolotes in response to these reports. They say the only sign of a confrontation they encountered was an abandoned pick up truck which showed bullet impacts. Personnel reportedly did not find any injured or deceased persons. They also report they did not find any firearms.

Later, Sinaloa’s Secretary of Public Security Cristóbal Castañeda Camarillo confirmed that the authorities had received reports of confrontations and police traveled to the town of Tecolotes to verify the reports.
He released an official statement on twitter which read: 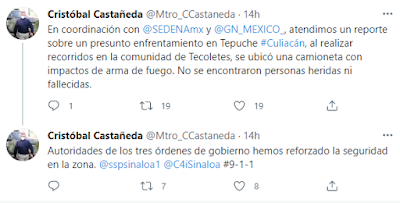 In coordination with @SEDENAmx and @GN_MEXICO_, we responded to a report of an alleged confrontation in Tepuche #Culiacán, while conducting patrols in the community of Tecoletes [sic], a pickup truck was located with gunshot wounds. No injuries or deaths were found.
Authorities from the three levels of government have reinforced security in the area. @[email protected] #9-1-1

The abandoned white Toyota pickup truck that was found by state police in Tecolotes (shown below) shows a significant amount of bullet impacts. Some news sources such as Proceso report that not one but two pick up trucks were discovered. 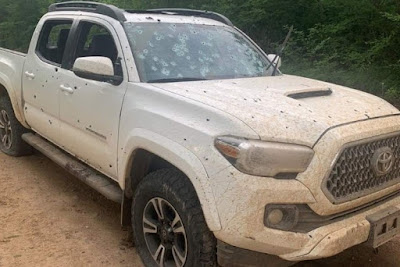 The shootouts in Tecolotes were reportedly between rival groups of armed men. Social media rumors allege that the shoot outs were between Sinaloa cartel’s Los Chapitos hitmen and Jesús Alexander Sánchez Félix alias “El Ruso” hitmen, from the Ismael Zambada García ”El Mayo” side of the Sinaloa Cartel.
Despite the official releases indicating that no one was found to have been injured or deceased from a shooting in Tecolotes, video emerged online which some claim depicts cartel hitmen intercepting a Red Cross ambulance in order to load their injured hitmen into the vehicle. See video below.
Video Source: @fernand17704066 on Twitter
The video was uploaded with this description by the user:

The ambulance is stopped in the southbound lane of Obregón Avenue and in the oncoming lane is a gray Toyota pickup truck and behind it a white pickup truck. At least three injured people are taken out of the gray truck and loaded into the ambulance. According to the person recording the video, the injured are “morillos” [youngsters, kids]. The ambulance is apparently a private ambulance. So far the authorities have not reported if they have located the injured in any hospital.

Strengthening these claims about the video is Ríodoce newspaper, which not only covered the video but named the approximate location the video took place. They state the video was recorded in the 6 de Enero neighborhood of northern Culiacán, on Álvaro Obregón Avenue.

Ríodoce is a news outlet famous for its coverage of the cartel wars. Ríodoce previously had its editor, Javier Valdez Cárdenas, allegedly killed for his coverage of the activities of El Mayo’s son, Ismael Zambada Imperial “El Mayito Gordo”. 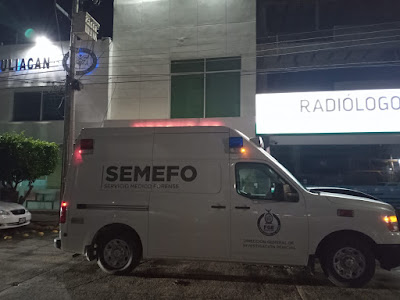 There are online rumors that on the morning of of July 14 2021, one of the gunmen injured in the confrontation died as a result of his wounds. He allegedly was receiving medical care inside a private hospital and he was not officially connected to the Tecolotes shooting, which authorities maintain caused to no injuries that they have been able to discover. A SEMEFO truck, or forensic medical truck was photographed outside the alleged location where the gunman died. 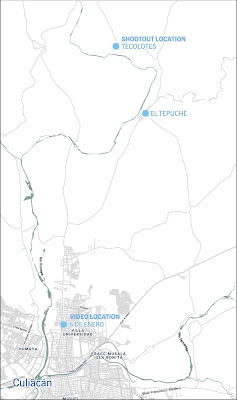