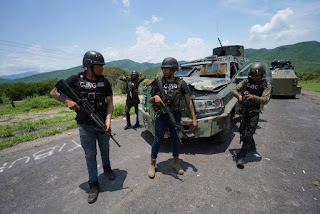 The criminal organizations of Sinaloa and Jalisco New Generation Cartel have made alliances with the narco-cleptocracy in these countries.

According to a report prepared by Vanguardia/MX, the Sinaloa Cartel and the Jalisco New Generation Cartel (CJNG) dispute the maritime trafficking of cocaine to Mexico in Guatemala and Peru, countries that are key links in the routes of passage and origin, in alliance with local groups and producers of this drug.

“Mexican criminal organizations exercise territorial control in rural and border areas of both countries for the transfer of cocaine shipments to the United States, replacing the old criminal structures, according to reports that the Guatemalan and Peruvian navies delivered to the International Research Center for Analysis against Maritime Drug Trafficking, based in Colombia.”

In its report, the Guatemalan Navy specified that the Jalisco New Generation Cartel, headed by the Michoacáno Nemesio Oseguera Cervantes, El Mencho, operates in the north of the territory, where the territories of Petén, Huehuetenango, Quiché and Alta Verapaz are located, adjacent to the Mexican states of Campeche, Tabasco and Chiapas.

In the central region of Guatemala there is a presence of “both organizations, in what could be called a disputed area or an undefined area” without a dominant criminal actor.

According to the Navy of that country, the “preponderant influence” of Mexican cartels on Guatemalan territory originated in the early years of the 21st century, when Mexico decided to confront drug trafficking and contain the arrival of narcotics in its territory.

“It resulted in a displacement of operators from those organizations to exert influence on the old Guatemalan structures.”

In Peru, the Sinaloa Cartel and the CJNG, as well as Colombian, Brazilian and European organizations, last year maintained sea and waterways as the main means of sending drugs and partnered with family groups from the cocaine hydrochloride and basic pasta production areas.

The Navy of the South American country pointed out in its report that criminal groups constantly try to infiltrate different social and political sectors of the country, as well as the private sectors.

According to the Peruvian Navy, the pandemic, far from affecting illicit drug trafficking, stimulated transnational criminal organizations to energize their shipments.

Needless to say, about 85 percent of drugs from South America are consolidated in Ecuadorian ports and have as their final destination, before embarking on their way to the United States of America, to Guatemala. Meanwhile, one hundred percent of the chemical precursors from China have as their last station, before leaving for U.S. territory, also Guatemala.