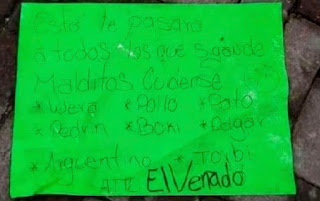 This will be the fate of everyone who is acting terrible here. Watch your backs Wera, Pollo, Pato, Pedrin, Beki, Edgar, Argentino and Torbi. Sincerely, El Venado

This Tuesday there was an armed shooting between alleged members of the Sinaloa Cartel and the Jalisco New Generation Cartel. In the municipality of Santiago de Ixcuintla in the state of Nayarit.

It was at approximately 6 am when the inhabitants of the municipal seat were awakened by a fierce armed confrontation between 2 criminal groups at the intersection of San Nicolás Bravo and Santos Degollado streets near the Benito Juárez town square.

At the crime scene, a person in military clothing was left slumped on top of a gray vehicle carrying an assault rifle and a handgun. In addition, there was also a threatening message signed by ‘El Venado’, an alleged member of the Sinaloa Cartel.

Unofficially, some Facebook pages mention that it was instead ‘El Bolillo’ who was actually killed, the alleged boss of the CJNG plaza in charge of shops, arenas, and rodeos in the region.