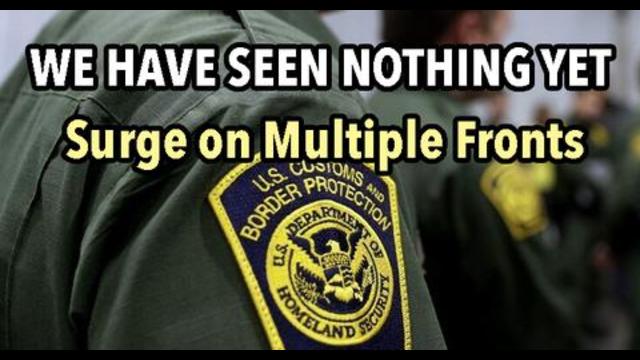 (Natural News) The situation at America’s southern border has almost never been worse under Resident Biden, and yet the alleged “president” insists that nothing is his own fault, and that President Donald Trump is to blame.

During a recent interview with ABC News anchor George Stephanopoulos, China Joe denied ever telling illegal “migrants” to “surge” the border, even though he is on record as having done so. Hunter’s dad also lied about putting children in “cages,” which is still happening to this very day.

When Stephanopoulos retorted that “this one might be worse,” Dementia Joe started rambling incoherently as he often does while throwing in barbs against Trump.

“No – well, it could be,” Sleepy Joe responded, apparently unaware of the fact that his own Department of Homeland Security (DHS) chief just confirmed this past week that the border crisis is seeing its biggest surge of invaders in 20 years.

“But, here’s the deal,” Biden went on to blab. “First of all, the idea that Joe Biden said ‘come’ is – I heard the other day that they’re coming because they know I’m a nice guy and I won’t do what Trump did.”

Stephanopoulos stated back, “They’re saying this,” to which Biden then responded:

“Well, here’s the deal: they’re not. The adults are being sent back, number one. Number two, what do you do with an unaccompanied child that comes to the border? Do you repeat what Trump did? Take them from their mothers? Move them away? Hold them in cells, et cetera? We’re not doing that!”

This is a lie, of course, as children are still being separated from their “parents” and held in border cages. And China Joe did invite them to come to the border, despite what he now claims.

Perhaps Beijing Biden forgot to take his Alzheimer’s medicine, or maybe he is simply a chronic liar who whenever he ends up in a bind starts making things up to try to appear innocent. In either case, nobody is buying the nonsensical ramblings of this mentally ill con man.

Biden also went on a verbal tirade against Americans who are refusing to be injected with Wuhan coronavirus (Covid-19) needles. According to Hunter’s dad, the country may not be able to “open” by July 4 after all because some people are refusing to obey the dementia patient’s decrees.

“I won’t be able to meet the July 4 deadline unless people listen,” Biden spewed, missing certain consonants and vowels as he typically does when speaking.

“I just don’t understand this sort of macho thing about, ‘I’m not gonna get the vaccine, I have a right as an American, my freedom to not do it.’ Well, why don’t you be a patriot, protect other people?”

Agreeing to modify one’s own DNA through experimental genetic modification certainly does not qualify as “patriotic” in the traditional sense of the word. The Biden regime, however, thinks there is nothing more patriotic then getting syringed with irreversible Big Pharma chemicals that are killing people.

Finally, China Joe relished in the memory of a time back in 2014 when he told Russian President Vladimir Putin that he does not have a soul. Biden met with Putin alone and is quite proud of that, even though President Trump was criticized when he did the same thing.

More related news about the failed “presidency” of Hunter’s dad can be found at Alzheimers.news.