The bodies of three dead men were left near a road; they had police uniforms, they are presumed to correspond to the elements kidnapped in Loreto, Zacatecas.

The event occurred around 06:30 this Sunday, on Federal Highway 25, near the community of Chrysostomos, at approximately kilometer 45.

The corpses had signs of torture; in addition, they wore uniforms from the Directorate of Public Security of the Municipality of Loreto, Zacatecas.

It should be noted that, approximately a week ago, two elements were kidnapped along with the director of the Directorate of Public Security of the Municipality of Loreto, all whose whereabouts were unknown.

Authorities of the three orders of government of Aguascalientes went to the place and were in charge of the crime scene.

The road was blocked and vehicle traffic stopped in its entirety.

Likewise, entering the community of San Marcos, in the municipality of Loreto, Zacatecas, three men were found hanging from a tree. As well a canvas with a message from organized crime.

Personnel of the Attorney General’s Office of the State of Aguascalientes (FGJEA) carried out the survey of the three police officers and transferred them to the facilities of the forensic medical service.

The three men found hanging in the community of San Marcos were placed at the disposal of the Zacatecan authorities. 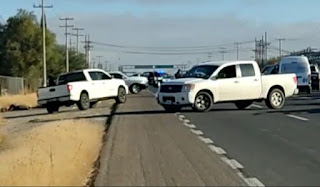 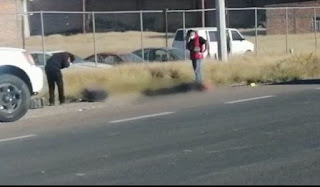 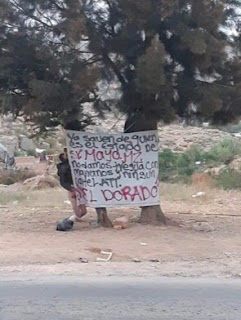 Narco message reads as follows:
You already know who this state belongs to. It pertains to Mayo Zambada. We don’t give a truce with pigs or any cartel for that matter. Sincerely, El Dorado