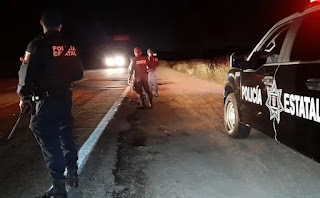 Two Colombian nationals were arrested during the first seconds of this Thursday in the municipality of Asientos after a chase and shooting that originated after being detected entering suspiciously from Zacatecas to the state of Aguascalientes.

According to information provided by the Secretariat of Public Security of the State of Aguascalientes to DEBATE, the men were detected entering the area around 00:00 today a.m. aboard a red Nissan Frontier, with tinted glass.

The detection of men was given by officers who make up Operation Shield, which was implemented since June 18 in order to prevent the entry of criminals into the entity, this derived from the high rates of violence experienced by the neighboring states of Zacatecas, Jalisco and Guanajuato.

The agents, detecting the suspicious unit, signaled for the driver’s car to stop. Said driver ignored the command and sped away on Federal Highway 25.

Immediately the agents undertook a chase being attacked with gunfire by the occupants of the vehicle, authorities were forced to repel the aggression.

After an exchange of gunfire, the armed men were injured and forced to stop a few kilometers ahead from where they had been asked to stop.

The state and municipal officials participating in Operation Shield managed to make a police siege and arrest the aggressors, who had their vehicle seized in which they were fleeing, as well as long and short firearms. 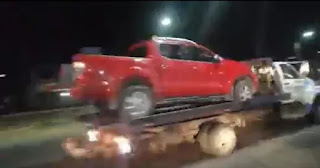 Truck in which the two Colombians who tried to enter with weapons from Zacatecas to Aguascalientes were traveling.

After the arrest, the two men said they were originally from Colombia, later they were taken to receive the necessary medical care by diagnosing from first aid experts that the wounds they presented are not at risk of their lives.

The SSP of Aguascalientes added to DEBATE that both the seized vehicle, as well as firearms, magazines and the two men were placed in the hands of the Attorney General’s Office (FGR), where federal authorities will be in charge of resolving the legal situation.