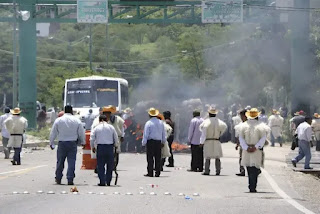 San Juan Chamula is a town with cold winds and a dense atmosphere.

Dense for the legacy of Mayan uses and customs seasoned with suspicion and narco ballads. It is the cradle and bastion of the cartel that bears its name.

The San Juan Chamula Cartel or Chamula Cartel in a few years achieved control of drug, weapons and human trafficking in the Highlands of Chiapas, once Los Zetas territory, today coveted by the Jalisco New Generation Cartel (CJNG).

This unique cartel of its kind – made up of Tsotsiles indigenous people – began as an “armed wing” for Los Zetas less than 20 years ago.

Now their main “plaza” is San Cristóbal de las Casas – less than 10 kilometers away – where they control drug retailing, auto parts theft and “ethno pornography”, among other crimes, according to sources consulted.

And despite operating openly for at least six years in San Cristóbal, only this Monday did the federal government publicly recognize its existence, while reporting the arrest of its alleged leader, Sebastián N or El Caracol.

During the presentation of the monthly security report, Ricardo Mejía, undersecretary of federal Security, said that the Chiapas Prosecutor’s Office arrested El Caracol on October 11, of whom it was reported: “He is the alleged leader of the Chamula Cartel, who have their operations center in the municipality of San Juan Chamula, Chiapas and are the generators of violence.”

FROM “TROOP” TO OWNERS OF THE HIGHLANDS

In the 80s, Chiapas became a drug crossing zone: it became the “border with the south of the continent” where cocaine came from for the United States.

Until the 2000s, the entity was characterized by the planting of marijuana – in the Highlands – and poppy, which as its production increased attracted the attention of groups such as the Gulf Cartel, the Pacific Cartel, and the Los Zetas.

But in the 2010s conflicts between them led Los Zetas to recruit men among the Tsotsiles of San Juan Chamula.

The Tsotsiles – a majority in the municipality – displaced on more than one occasion for religious or political reasons have dispersed throughout the state and the country, which has allowed them to create an extensive network of contacts.

Some settled in San Cristóbal, where as the city grew they became experts in the sale and distribution of fayuca – including pornography – until they learned human trafficking and then joined the ranks of Los Zetas.

Sources consulted who asked for anonymity indicated that after a while as an “armed wing” the Chamulas learned the “trade” and took power.

Regarding its origin, the specialist in national security, Francisco Javier Franco, said that it is not accidental in a state in constant political, economic and social upheaval.

Its presence in Chiapas is more dangerous, since the entity adjoins points such as the President’s house or strategic federal facilities.

And their dangerousness is such that they “displaced” Los Zetas, “because they probably said to themselves ‘if we already know the business, why do we want bosses?’ This group is characterized by its autonomous ways of proceeding.

They learn the trade and then go about it autonomously. They found the circuits of weapons, drugs and people (…) instead of the Gulf Cartel entering, the Chamulas settled,” anonymous sources point out.

Since then, marijuana and cocaine have been transferred, in addition to committing kidnappings.

They were no longer associated with Los Zetas, but with their Tsotsil/Chamula identity.

Their presence in the tourist city – considered the second nationwide in drug retail, after Cancun – is perceived by “Los Motonetos”, men who charge a protection fee, offer security to taxi drivers, sell drugs or act as hitmen on the back of a motorcycle.

THEIR POSSIBILITY TO EVOLVE

Javier Franco emphasizes that it will be difficult to combat them due to its cohesion based on community leadership.

The specialist highlights the strength of the leaders that its members have known from a young age. Being a relatively small town, everyone knows and understands why, in case the Government looks for informants inside, it will hardly be able to get them.

He also considers that they could extend beyond Chiapas, as its level of violence and social support escalates, in addition to means of financing and crimes that it manages to control.

“They have already set themselves the challenge of saying here we are. We may or may not grow but I bet they will grow. San Juan Chamula has shown these issues for a long time and the State is no stranger to that. They are not going to stop there,” the academic emphasized.

* For further reading concerning this cartel the following link is highly recommended. 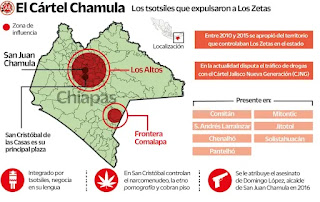