At noon this Friday, January 21, lawyer Juan José Soltero Meza, a professional linked to the National Regeneration Movement (Morena) party in Jalisco, was shot at the doors of his legal office in Guadalajara.

Municipal patrolmen received the report of the shooting outside building number 2850 of Calzada Lázaro Cárdenas at the intersection with Tonanzin avenue, in the Jardines del Bosque subdivision.


It transpired that nine-millimeter caliber shells were found at the scene. Personnel from the Jalisco Prosecutor’s Office and the expert services of the Jalisco Institute of Forensic Sciences (IJCF) are working on the investigation. The attorney’s vehicle has five bullet wounds. While a person who was in the vehicle has abrasions, after the windows were broken by the bullet impacts. 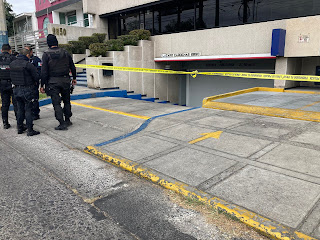 According to the reports collected by the elements of the Guadalajara Police Station, the person injured with a firearm projectile impact on the head is the litigant Juan José Soltero Meza, who was transferred to a private hospital in Zapopan. At the moment, further details about the person or persons responsible for the attack and the state of health of the politician, who apparently arrived at the hospital by his own means, are unknown.
He is the former campaign coordinator of Carlos Lomelí Bolaños when he ran for governor in 2018 and the current councilor of the Guadalajara City Council as a losing mayoral candidate for Morena. He was also a party delegate in Jalisco, replacing Lomelí himself.

In June 2018, during the electoral dirty war, Juan José was pointed out by the campaign team of the current governor Enrique Alfaro Ramírez, of carrying legal defenses of organized crime figures, such as Mrs. Alejandrina Salazar, first wife of Joaquín “El Chapo” Guzman. Animal Politico news portal, which interviewed the professional, who “flatly denied that he had any professional or personal relationship” with Guzmán Loera’s first wife and son.

The information was obtained from consultations on the website of the Council of the Federal Judiciary, where a complaint appears derived from an amparo proceeding promoted in favor of Alejandrina Salazar, before a Collegiate Court in Criminal Matters with residence in Guadalajara.

In an agreement published on March 27, 2008, it reads verbatim: “… the appeal filed by Jose Juan Soltero Meza authorized by the complainant María Alejandrina Salazar Hernández is admitted. Proceed to the formulation of the corresponding draft resolution…”

Complaint 20/2008, declared partially well-founded so that the complainant, who claimed an arrest warrant, be granted a broader provisional suspension, was left without matter when the definitive suspension was resolved.

Animal Politico also publishes that the lawyer Soltero Meza was authorized to hear and receive all kinds of notifications in an amparo filed in favor of Iván Archivaldo Guzmán Salazar “El Chapito”, son of “El Chapo” Guzmán, in April 2008 before the Court Eighth District in Criminal Matters of Jalisco.

According to the amparo trial 267/2008, “El Chapito” claimed a possible arrest warrant for the murder of a young Canadian named Kristen Paige Deyell and the national César Augusto Pulido Mendoza, a matter for which he had already been exonerated in 2005.

MORENA’s representative before the Electoral and Citizen Participation Institute of Jalisco, José Juan Soltero, who is also the legal representative of Banorte and Banco del Bajío in the said entity, responded that the accusations are “a consequence of a dirty war in the electoral process. It is a simple revenge for exhibiting the acts of corruption of the governments of the Citizen Movement (MC)”.

However, ZETA was able to corroborate, in searches of judicial files, that the litigant has been a lawyer for other famous clients in Jalisco, among them Carlos González Rocha “El Balazo”, one of the most important armored truck robbers in the 1990s. ninety; the “trailer assailant” Miguel Arellano Valencia, escaped from the Puente Grande prison on January 3, 2008; and Thomas Frank White, an American accused of pederasty against several minors in Puerto Vallarta.

Regarding the names of the lawyers that appear in the writ of protection of “El Chapito” Guzmán, and who indicate as the address to receive notifications the same of Soltero y Asociados at 2850 Lázaro Cárdenas Avenue, fourth floor, office 402 “A ” and “B”, in Jardines del Bosque, in Guadalajara, have also had interesting clients.

Carlos Lomeli’s Campaign Coordinator
José Juan Soltero was appointed as coordinator of the campaign for governor by the MORENA candidate, Carlos Lomelí Bolaños, on Saturday, March 3, and it was stated that he would have the following responsibilities: “organize the political campaign, coordinate the army of militants that will have the electoral mobilization for the promotion and defense of the vote.”

Carlos Lomelí Bolaños, one of the businessmen closest to President Andrés Manuel López Obrador and Morena’s former candidate for mayor of Guadalajara, Jalisco, admitted that he sold chemical precursors to the Sinaloa Cartel and delivered goods to the government of the United States for $2.7 million dollars, to get rid of the charges. The foregoing, according to documents and the testimony of two former agents of the United States Drug Enforcement Administration (DEA) obtained by the Latinus news portal.

Official information held by Latinus confirmed what the businessman and former federal government delegate in Jalisco had denied, that is, that he sold chemicals to the criminal group and that he negotiated the delivery of money in exchange for the anti-narcotics agency of the United States suspend the investigation initiated against him in 2006.

He also confessed to having delivered the assets so that the Office for Foreign Assets Control (OFAC) would remove him from the list of companies and people related to drug trafficking, just like his then-pharmaceutical Lomedic. Lomedic was accused in 2008 by the United States Department of the Treasury of being a front for money laundering for the Amezcua Contreras Cartel, and it froze all the assets and bank accounts of Lomelí, his family and his company in United States territory.

Since then, Carlos Lomelí Bolaños has been accused by OFAC of supporting the illegal diversion of methamphetamine precursors. The documents and statements obtained by Latinus contradict Morena’s candidate for mayor of Guadalajara, who in various interviews and publicly has insisted that the United States government removed him from the OFAC list because it found no elements against him.

According to a final judgment of forfeiture issued by a District Judge in El Paso, Texas on January 27, 2011 – obtained by Latinus–, Lomelí voluntarily surrendered his assets to the United States government and was involved in the distribution of Lovarin-P tablets to manufacture methamphetamine, as well as in money laundering.

The sentence signed by Judge Frank Montalvo establishes that Lomelí and his wife, Karina Lucía Navarro Pérez, handed over to the United States government about 2.7 million dollars deposited in three accounts in that country. The money, seized since 2008, was not claimed by Morena’s candidate or his wife, according to the court document.

The largest account opened at a subsidiary of the New York Mellon Bank, had $1.9 million on deposit. The other two were seized with a balance of 602 thousand and 100 thousand dollars, respectively. The declaration of responsibility and the association of the businessman with the Sinaloa Cartel, until now publicly unknown, was narrated by a DEA agent in a private meeting held at the United States embassy in Mexico, in March 2012.

Two DEA agents, the OFAC attaché in Mexico, and a group of lawyers were present there. “Lomelí spoke with the United States government, told them what he knew, and let the United States freeze 2.7 million (of dollars) of his assets. He admitted that he sold to organized crime, including the Sinaloa Cartel, and signed an admission of guilt in a show of good faith,” said one of the DEA agents identified as “M,” according to a 13-page written record he had. “The government followed up on the illegal sales of Lomelí and these coincided with the $2.7 million (dollars) of frozen assets,” it is indicated in one of the paragraphs of the minutes.

Latinus interviewed two former DEA agents who were closely acquainted with the investigation against Morena’s current candidate for mayor of Guadalajara and confirmed separately that Lomelí admitted his responsibility for facilitating synthetic drug precursors and having a relationship with Mexican cartels. about whom he provided first-hand information.

“Lomelí was never documented as an informant, but on his freedom, he agreed with the office (the DEA) to collaborate. What Lomelí told us is that he was mainly associated with Sinaloa, what was then called the Federation, with ‘Nacho’ Coronel, ‘El Mayo’ Zambada, ‘El Chapo’, with ‘Los Güeros’, the Rodríguez Oliveras and others who they worked there. Those people were his clients,” says one of the agents interviewed, who spent 25 years in the DEA, five of them working in Mexico.

According to the former anti-narcotics officer, the DEA began investigating Lomelí in 2006, and months later the pharmaceutical businessman became a priority target for the United States anti-drug office.