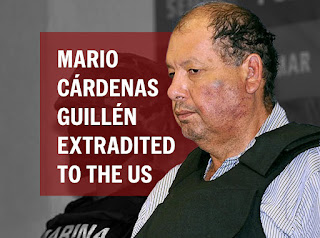 Mario Cárdenas Guillén, El M-1, Metro, Gordo, and/or Señor Gordo, former head of the Gulf Cartel, was handed over for extradition to the United States, where he is required by a Texas court for drug trafficking charges. The brother of Osiel Cárdenas Guillén arrived at the International Airport of Mexico City guarded by agents of the Attorney General’s Office (FGR), who made the former leader available to US authorities who was sentenced in Mexico to 20 years behind bars in April last year.

According to the FGR statement, the defendant will face charges of criminal association and against health, equivalent to his membership in the criminal organization and for sending narcotics from Mexico. As a member of a criminal group, he was likely responsible for the large-scale importation of cocaine into Houston, Texas.

He was initially arrested in 1995 and imprisoned in Matamoros on organized crime and drug trafficking charges. While in prison, Mario was also known for holding large parties, inviting prostitutes, organizing gambling rings for horse races and cockfights, and having all sorts of commodities. Upon it being discovered in 2003 that he was still organizing drug shipments from behind bars, he was reassigned to a prison in Jalisco.  He was released sometime in 2007 and quietly rejoined his family in the Gulf Cartel.
He is regarded to have taken over leadership of the cartel at some point following the November 5, 2010 death of Antonio Ezequiel “Tony Tormenta”, but the exact extent of his power is unclear as it was in this timeframe that the Gulf Cartel began to splinter into a number of independent factions. The primary fracture was between the traditional leadership of the Cardenas-Guillen faction and Los Zetas, the armed wing of the cartel led by Heriberto “Z-3” Lazcano-Lazcano. Mario was arrested on September 3, 2012, and was imprisoned in Mexico. Mario was part of a faction known as Grupo M/Los Marinos, which was reportedly made up of former marines and was based in Matamoros. His code name was “M-1″, but it is often confused with the code names from another Gulf Cartel faction, Los Metros. Cartel member Lorenzo Cuéllar Botello from Los Metros also had the code name “M-1″.
El Gordo’s Fight Against ExtraditionMario Cárdenas Guillén was arrested by the Secretary of the Mexican Navy (Semar) on September 3, 2012, after an operation in the city of Altamira. The Drug Enforcement Administration (DEA) still maintains him on its fugitive list for violations of federal law on conspiracy charges. In that capture, firearms, ammunition, two grenades, 129 thousand Mexican pesos, communications equipment, a car, and four packages of cocaine were found.
El Gordo commanded a faction of the Gulf Cartel after the downfall of his brother, Tony Tormenta. He disputed the leadership of the criminal group against Jorge Eduardo Costilla, El Coss, who was arrested seven days later by Semar and was extradited to the US in 2015.

In April of 2019, the Attorney General’s Office informed that the arrest warrant for the extradition was filed at the Federal Criminal Justice Center in the State of Mexico, in Almoloya de Juárez. In a request by the US government and in accordance with the Extradition Treaty signed between the two countries. “The arrest warrant was completed without the use of violence or harm to third parties, with respect at all times for their human rights,” the federal agency communicated through a statement.

In May of 2020, a Mexican federal judge granted a motion that prevents Mario Cárdenas Guillén, alias “El M-1″ and/or “El Gordo”, from being extradited to the United States. The former leader of the Gulf Cartel alleged that the United States was the world epicenter of the COVID-19 epidemic, in view of which his hypertensive and obese condition puts him at high risk, ensuring a death sentence.
Cárdenas Guillén was sentenced on April 16, 2021, to 20 years in Mexico for organized crime,  committing crimes against health, with administration, supervision, or management functions. Previously, in June 2019, a federal judge had sentenced him, but the defense appealed the decision, for which the procedure was ordered to be reinstated.
In the second week of 2022, the Supreme Court of Justice of the Nation refused to review the protection promoted by the drug trafficker, who did not want to be extradited to the United States. But none of the eleven ministers considered the matter to be of any relevance to them.

The case was transferred to the First Collegiate Criminal Court of the Second Circuit after the request of the lawyers, who considered that the ruling of an Amparo judge should be reviewed, who refused to stop the request of the US authorities.

The arguments of the defense of Cárdenas Guillén focused on the delay of the ruling since the court located in the State of Mexico took more than a year and a half to determine that it would not be granted the protection of justice to stop the process, period that exceeded what was established in the extradition treaty between the two countries.

He was eventually granted the referral to face the charges in the Federal Court for the Eastern District of Texas. The Ministry of Foreign Affairs granted the procedure to be delivered in the country’s capital. 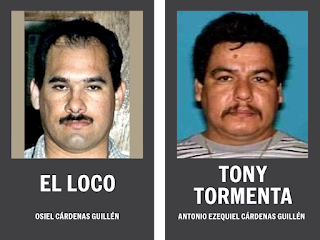 The four most notable Cárdenas Guillén family members in the Gulf Cartel are the brothers Antonio Ezequiel- “Tony Tormenta” (born 1962), Mario Alberto- “El Gordo”, “El M-1″ (born 1964), Homero- “El Majadero”, “El Orejón” (born 1966) and the most well known, Osiel- “El Mata Amigos”, “El Costroso”, “El Loco”, “El Patón” (born May 18, 1967).
Biography’s and history of CDG generally focus on Osiel only and start with his rise to leadership in the CDG, however, the family criminal career starts earlier. Osiel used to wash law enforcement trucks in Matamoros, which lead to his nickname for always being dirty, with “Tony Tormenta”, to whom it appears he was always closest. As a young adult, Mario helped Osiel start an auto mechanic’s shop and they started a small criminal organization in which Tony Tormenta handled cocaine purchases from others, Osiel handled the street sales and Homero handled drug trafficking into the United States. 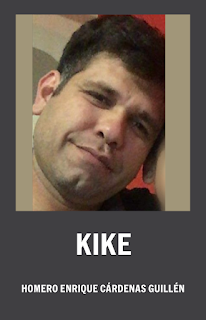 Mario was arrested in 1995 and imprisoned in Matamoros on organized crime and drug trafficking charges. Osiel at some point joined the CDG and rose to be an operations leader under of Salvador “El Chava” Gómez Herrera. In July 1999 killed his “compadre” in order to gain leadership of the cartel, thus earning his nickname “El Mata Amigos”. Under the leadership of Osiel, only Tony Tormenta was readily known as a high-ranking member of the cartel. Homero likely operated discretely and Mario organized drug shipments from prison.
Mario’s brother, Osiel Cárdenas Guillén, founded Los Zetas as an armed wing of the cartel, from deserters from an elite body of the Mexican Army. He was arrested in Tamaulipas in 2003 and his extradition did not take place until 2007. He plead guilty in February 2010 and was sentenced to 25 years in prison and a $50 million fine. 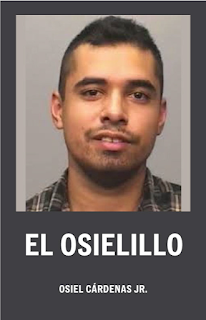 Osiel’s son, Osiel Cardenas, Jr. “El Osielillo,” not believed to be in any leadership position within the cartel, was arrested in December 2021 in Brownsville, Texas on parole violations stemming from a 2018 arrest on weapons charges. Antonio Ezequiel Cárdenas Guillén, “Tony Tormenta,” also a leader of the Gulf Cartel, was killed in 2010 in a confrontation with military agents in Matamoros, Tamaulipas, nine months after his brother was sentenced. There appears to have been an internal rift within the Gulf cartel between factions known as Los Rojos and Los Metros in 2011 over an issue of leadership succession in the Reynosa plaza. It appears that the Metros emerged victorious, controlling the Gulf cartel leadership although the Rojos “retain considerable manpower.” Jorge “El Coss” Eduardo Costilla-Sánchez, a high-ranking member of the cartel and Mario’s rival, was seen as next in line for leadership but was also captured just 10 days later. 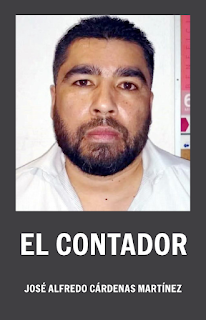 Various Cardena’s family relatives and past subordinates would eventually become leaders of the Gulf Cartel’s main factions throughout the next decade with the Gulf Cartel largely considered to be a group of independent factions. Most notably and recently was their cousin Jose Alfredo Cardenas-Martinez better known as “El Contador” prior to his recent arrest in 2022.
Sources Infobae, Borderland Beat, Borderland Beat