BY HENRY SHULDINER. The death of two indigenous leaders in Guerrero, Mexico, has again drawn attention to the government’s negligent protection of indigenous communities targeted by criminal groups throughout Mexico. 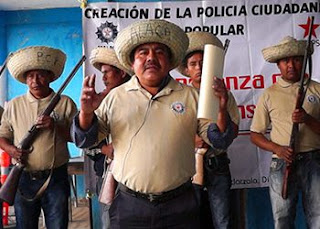 In a Facebook post, the Guerrero-Emiliano Zapata Indigenous and Popular Council (Cipog-EZ) announced members Lorena Chantzin Paxacuasingo and Marcos Campos Ahuejote were found dead after they were reported missing on May 6. The Cipog-EZ blamed the Ardillos, a local criminal group known for extorting and kidnapping leaders of the community.

Community members and activists sounded alarm bells about the Ardillos’ plans to expand into El Ocotito valley in October 2021, but authorities did little in response. Warnings about an attack came to fruition in January 2022, when a confrontation between the Unión de Pueblos y Organizaciones del Estado de Guerrero (UPOEG), an indigenous self-defense group, and Los Ardillos left four community members dead.

In response to the attacks and several disappearances of Nahuas Indigenous community members, Cipog-EZ organized a series of protests and roadblocks in March 2022, demanding that the government provide better security and protection for their communities, centering the high levels of impunity for criminal groups in Guerrero.

The killings are only the most recent in a series of attacks on the Indigenous communities of Guerrero. In January 2020, the Ardillos murdered ten Indigenous musicians in Chilapa, Guerrero. A self-defense group from the Nahuas community circulated videos of children armed with heavy-duty weapons in response to attacks, claiming them as the newest recruits in the battle against the Ardillos.

In more isolated parts of Mexico, Indigenous communities have become targets of constant and systematic oppression by local criminal groups, as exemplified by the Ardillos’ targeting of the Nahuas community.

While the Ardillos have been a constant criminal presence in the mountainous region of Guerrero for two decades, their business has shifted and they have become increasingly reliant on local communities for income. The group once oversaw poppy cultivation and heroin trafficking, forcing members of local communities to work in the fields for them, according to complaints made by victims to police in 2019. But since the decline in demand for heroin, the Ardillos have relied on extortion, kidnapping and illegal mining. Again, local community members have to pay up or recruited to work for the groups.

There is little hope of this changing anytime soon. According to a 2020 report from the International Crisis Group, security forces seldom intervene in Guerrero, essentially allowing criminal organizations free rein to construct laboratories, cultivate drug plantations, and extort community members and businesses.

And the Nahuas community of Guerrero is not alone in this fate. In the Sierra Tarahumara, a mountain range crossing the northern state of Chihuahua, the Rarámuri Indigenous community and several others, have suffered at the hands of organized crime for years. Illegal timber, poppy cultivation, land seizures and illegal mining have all blighted the lives of Rarámuri members, displacing hundreds and killing dozens.

The war between the Sinaloa Cartel and the Jalisco Cartel New Generation (Cartel Jalisco Nueva Generación – CJNG) have blighted Indigenous communities across the northern states of Durango, Nayarit, Zacatecas and Jalisco, according to an April 2021 investigation by El País.

Yet the government has not made this a security priority. In February 2021, the Interior Ministry’s Commissioner for Dialogue with Indigenous Peoples received a letter from the Huichol Indigenous community in northern Mexico. “Our communities have witnessed shootings, gunfights and battles…proving not only uncertainty, but also affecting innocent people, who call this area their home since before these groups arrived,” read the letter.

That same month, the then-governor of Zacatecas, Alejandro Tello called for help from López Obrador due to an “epidemic of violence” against Indigenous communities.

Yet when questioned directly in January this year about a plan to help these communities, López Obrador dismissed the topic, instead praising Indigenous groups for having “less violence” due to allegedly having less “disintegration of families” and preserving “values and customs.”

This article reposted with permission from InSight Crime.