The mayor of Juarez says the deaths of four adults and two children could’ve been avoided if a federal judge hadn’t released three suspected cartel members from custody last Friday.

“The municipal police arrested these persons […] at the very least we could have prevented the death of the children if the judge had done his job and hadn’t released these persons,” Mayor Cruz Perez Cuellar said Monday.

The victims were gunned down late Friday afternoon along Tecnologico Avenue, shortly after coming out of a federal courtroom. The Chihuahua state police said in a statement the victims were three men between 30 and 50 years old, a 30–35-year-old woman, and two children – a boy and a girl – aged 10-12. Five died on the scene and one in the IMSS Hospital.

* Saturday, May 7, 2022: In the Minerales neighborhood of Chihuahua City, four people were found dead with their throats slashed. They also had knife wounds all over their torsos, according to Diario de Chihuahua.

* Friday, April 15, 2022: A top law-enforcement official is blaming a drug cartel for the murder of two Chihuahua state police officers, three civilians and a Mexican immigration agent in Janos, Chihuahua, a rural area west of Juarez known as a hotbed for migrant smuggling activity.

“Three of these persons had been detained (a few) days ago with guns and with drugs. The municipal police did its job. It sent them to a federal judge. The judge freed them, and we had this tragedy,” Perez Cuellar said in an earlier news conference he shared on social media. “If the judge hadn’t done this, they would probably still be alive but, of course, would have to pay the consequences of their crimes, but alive.” 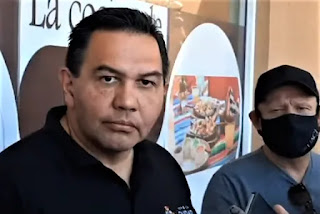 Juarez Mayor Cruz Perez Cuellar reacts to the massacre of four adults and two children near a federal courthouse in Juarez.

Local news media citing unnamed investigators have characterized the attack as the result of a long-running feud between two rival drug gangs, the Sinaloa-affiliated Doble A (Artistas Asesinos) and La Empresa, a group often associated with La Linea cartel and Los Aztecas gang. However, Border Report could not independently verify the accounts on Monday.

Perez Cuellar said the arrest of the three suspects proves the municipal police is doing its part to reduce crime in Juarez, which an independent Mexico City group that tracks per capita murders around the world ranked as the sixth most violent city in the world in 2021.

“The facts speak for themselves. They (the municipal police) arrested them, referred them for prosecution,” the mayor said. “I think this is an issue which may involve corruption. They had weapons. Those are federal crimes and are serious crimes. The revolving door (explanation) applies when an investigation falls short and people are freed because of those errors. But they were found in flagrancy. There is no way to justify them being freed.”

Neither the mayor nor the state police identified the judge on Monday.