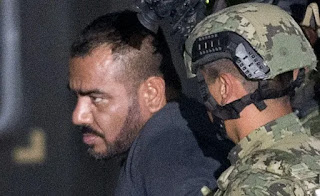 Gastelum Ávila is imprisoned in the Altiplano maximum security prison, in the State of Mexico.

A federal judge rejected the expert evidence on criminal law and criminal procedure in the United States offered by Jorge Iván Gastelum Ávila, alias “Cholo Iván”, who was the personal escort of capo Joaquín “El Chapo” Guzmán, to stop his extradition to the US.

According to the head of the Second District Court for Amparo Matters and Federal Trials in the State of Mexico, the former member of the Sinaloa Cartel, arrested in 2016 along with “El Chapo”, was able to present them during the extradition trial in which he was aware.

The complainant was able to provide the means of proof that he deemed necessary for his defense, or to dispute the determination in which they were not admitted, since the aggrieved party is a party to the extradition procedure 3/2020, matter of the act claimed, and as noted in the records that the responsible judge attached to his justified report, the complainant appeared at all times at said trial, so much so that, at the corresponding stage, he raised exceptions and offered various pieces of evidence.”

And he added: “It is possible to state that the complainant was aware of the litigation and even intervened in it as a procedural part; therefore, if it now offers such expert opinions, it is incontestable that this jurisdictional body is unable to admit the aforementioned means of conviction, since they were not known by those responsible, because as specified, the aggrieved party is a party to the original trial and in that case, it was able to offer the evidence that it deemed necessary in accordance with its interests, however in the natural procedure and not in this instance.”

Likewise, the judge refused to postpone in advance the constitutional hearing scheduled for 9:25 on May 24, to unburden said evidence consisting of: an expert in criminal law and criminal procedure of the United States of America.

This is a new setback for “El Cholo Iván”, since last Sunday a Court dismissed the complaint he filed against the refusal of the Ministry of Foreign Affairs (SRE) to give him access to part of the file of the extradition process against him.

Gastelum Ávila is imprisoned in the Altiplano maximum security prison, in the State of Mexico.