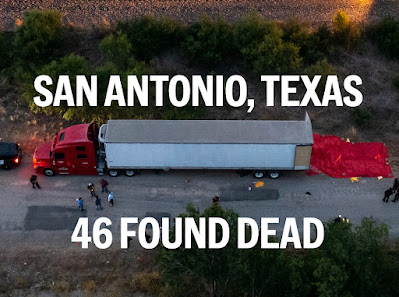 46 dead bodies and 16 surviving victims were found inside the back of a tractor-trailer in San Antonio, Texas. The victims are presumed to be migrant workers who were being transported.

The 16 surviving victims were suffering heat stroke and heat exhaustion. The truck was a refrigerated truck however there was no visible AC unit on the rig nor any visible sign of available water for the workers.

This is a live post which is actively being written and updated based on preliminary reports which can sometimes be inaccurate during a breaking story.

During the afternoon of Monday, June 27, 2022, a man working inside a building heard a cry from outside the building. He went out to investigate and saw a tractor-trailer parked on the side of the road. The back doors of the trailer were partially opened, he looked inside and he saw stacks of human bodies inside.

At approximately 5:50 pm, an emergency line call was received. San Antonio Fire engine #52 responded to 9600 Quintana Road for a report of a dead person. There was a person outside and several more people that firefighters could see inside, later describing it as “stacks of bodies”. They began the process of triage, finding over 16 people who were still showing vital signs among a mass of deceased bodies. They were suffering heat stroke or heat exhaustion. 12 of those they found alive were adults and 4 were children. 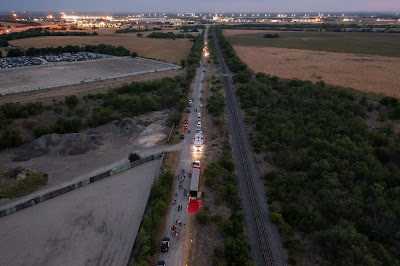 At approximately 9:00 pm on Monday, June 27, 2022, the San Antonio Police Chief William McManus and the Fire Chief Charles Hood gave a statement to reporters. Their statement was then relayed in Spanish for Spanish-speaking Texans. The following is a direct transcript of what they said:

CHIEF MCMANUS: I want to emphasize that this is preliminary information and it could change. So the first call came in at about ten minutes to 6:00 this afternoon. A worker, who works in one of the buildings up here behind me, heard a cry for help, came out to investigate, found a trailer with the doors partially open, opened them up to take a look and found a number of deceased individuals inside.

So, we have three people in custody. We don’t know if they are absolutely connected to this or not. This investigation has been turned over to HSI. It is now a federal investigation. Turned it over to them probably about two hours ago.

But right now we’ve got about three folks in custody. And again, this is all preliminary information, I want to turn it over to Chief Hood.

CHIEF HOOD: Good evening. Charleston, San Antonio Fire Department. Approximately 6:00 this evening, the San Antonio fire department responded to 9600 Quintana Road for a report of a dead person. Engine 52 arrived and found the trailer, as Chief McManus mentioned, with a body outside and several that they could visibly see inside once the doors were opened.

At this time, we have processed approximately 46 bodies that have been triaged and tagged and declared deceased at this time.

Fortunately, we were able to transport 16 people, 12 of those are adults and 4 pediatric. All of them were conscious at the time upon transportation. First patient was transported at 6:07 pm, with the last one being transported at 6:57 pm.

So, for a mass casualty with triage involved, it went very smoothly and very quickly.

The patients that we saw were hot to the touch. They were suffering from heat stroke, heat exhaustion. No signs of water in the vehicle. It was a refrigerated tractor-trailer but there was no visible working AC unit on that rig.

At this time we have released all our [fire] companies back in service. We used about 60 firefighters, 20 fire engines and 10 medic units, of which we transported to various local hospitals throughout the city. So it is our hope and prayer that the conditions of those that were transported will improve as we speak.

We are currently putting those 60 members [referring to his firefighters] through critical incident stress debriefing.

Again, we are not supposed to open up a truck and see stacks of bodies in there. None of us come to work  imagining that so we’re working through the behavioral health of our folks right now.

REPORTER: Could you  just confirm the number, the numbers that you just gave?

REPORTER: Chief, what were the conditions of those that were transferred?

CHIEF HOOD: All heat related injuries and no fatalities of peeds [pediatrics] that we know of.

Following the Spanish-version of their statements, both Chief McManus and Chief Hood took questions from reporters.