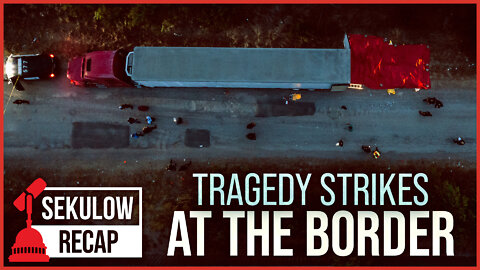 President Biden’s humanitarian crisis at our southern border continues to worsen. Now some FIFTY migrants just lost their lives after being locked in the back of an abandoned semi-truck in San Antonio, Texas.

A handful of survivors, including innocent children, were transported to local hospitals in serious condition. Their skin was described by rescue workers as “hot to the touch.”

These desperate people trusted coyotes – let’s call them what they are, human traffickers – to get them into the United States and instead they were left to die a horrifying death in a dark, hot truck with little air and no water. It’s the worst case of deaths at the border we’ve ever encountered.

And it’s because of the Biden Administration’s disastrous refusal to enforce immigration laws. Even the President of Mexico blamed the “lack of control” at the border and within the U.S. interior for this atrocity.

These victims aren’t just statistics. They were human beings. Imagine how it felt to be crammed into a dark trailer in Mexico and driven to Texas, during record heat temperatures all across the country, only to be trapped and abandoned. It sounds like a living nightmare. This is the reality of President Biden’s inaction and incompetence.

ACLJ Senior Military Analyst Col. Wesley Smith pointed out how the Biden Administration’s inaction is allowing this crisis to worsen, introducing increasing threats to the American people and the Mexican people, due to their own indifference:
“It is an abject failure of their own design. So much could be done. People are telling them, the border patrol is telling them, things that could help this situation. They are literally refusing to do it. . . . It’s inhumane.

If we had a secure border, and by that I mean if there were a wall with orderly ports of entry, and if we returned everyone who crossed except the most obvious cases of a legitimate asylum claim, if we did those two things – a secure border and following immigration law – two things would happen: First the drug cartels, their business would almost dry up, because of the second thing, fewer people would be trying to cross the border. There would be fewer people sexually trafficked. There would be fewer deaths. There’d be fewer drugs.

Along with the danger to migrants in search of a better life, including women and children whose safety is perpetually at risk at the border, President Biden’s open border is a clear and present threat to our national security and safety. Four people were apprehended crossing the border who originally came from Afghanistan. That’s a long trip. Why are they coming illegally? Why don’t they want us to know they’re here? Who else is crossing the border that we DON’T know about?

It has to stop.