Mexicans who cross into the US pay more than Central Americans because they use more consolidated trafficking networks, warned a federal official 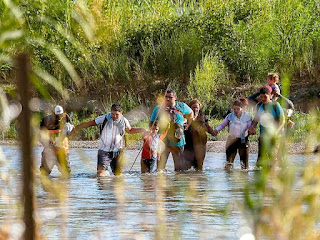 Migrants from Mexico pay up to $400 more.

In a forum in the Chamber of Deputies, Rocío González, head of the Migration Policy Unit of the Ministry of the Interior, said that seven out of 10 migrants from Guatemala, Honduras and El Salvador who crossed into the US via Mexico used traffickers. , which implies that most of the routes are taken by criminals.

In the case of Mexicans, five out of 10 paid polleros, on average, 400 dollars more than Central Americans.

The hypothesis is that the networks used by the nationals are more consolidated, therefore, the successful crossing is more likely”, explained the official.

Human beings have been reduced to a mere commodity that is traded on the global market,” lamented José Manuel Grima, president of the Latin American Observatory on Human Trafficking and Trafficking.

The smuggling of migrants to cross from Mexico to the United States left as profit 615 million dollars (12 thousand 300 million Mexican pesos) in 2019, reported the Ministry of the Interior (Segob).

The agency gave the figure from the 124,000 people who were entangled on these networks and during that year they paid between 4,559 and 4,967 dollars.

According to Rocío González Higuera, head of the Unit for Migration Policy, Registration and Identity of Persons (UPMRIP), seven out of 10 migrants from Guatemala, Honduras and El Salvador, who crossed into the United States irregularly through the border with Mexico used some guide or coyote, which implies that most of the crossings are subordinated to a traffic network.

In the case of Mexicans, five out of ten turn to a pollero.

The federal official participated in the VII Latin American and Caribbean Congress on Human Trafficking and Migrant Smuggling, in the Chamber of Deputies, with the aim of responding to the challenges that this scourge represents for Mexico.

On June 27, in San Antonio, Texas, the bodies of dead migrants were found in a trailer. As a result of this incident, 53 people have died.

Excelsior reported that Mexico and the United States are investigating coyote networks and human trafficking.

Mexicans pay up to $400 more than Central Americans.

The hypothesis is that the networks used by compatriots are more consolidated, therefore, a successful crossing is more likely,” he said.

He explained that the figure obtained from migrant payments and profits from traffickers is the result of the Survey on Migration on the Southern Border (EMIF SUR).

However, the size of the black market must be greater.

In his speech, the president of the Latin American Observatory on Human Trafficking and Trafficking, José Manuel Grima, lamented that there are new forms of slavery, since the life and bodies of human beings have been reduced to “merchandise”.

The lives and bodies of human beings have been reduced to a mere commodity traded on the global market. New forms of slavery as a result of human trafficking, which is nothing more than the purchase of human beings,” he said.