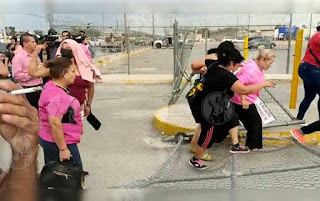 Relatives of inmates have caused various damages to the property

Relatives of the inmates in Cereso #3 of Ciudad Juárez, tried to force themselves into the prison to demand information about the situation in which their relatives prevail.

Within the claims, a group of people demolished part of the prison center parking lot structure. Prior to this they damaged one of the stockade sales booths.

The State Attorney General’s Office reported through a statement that elements of the three government orders managed to contain a fight that appeared on Thursday afternoon at the Cereso prison.

The preliminary report establishes that around 1:00 p.m. a fight broke out in one of the areas of the prison, which resulted in inmates being abducted who are part of rival gangs.

In addition, it was announced that three inmates of the Cereso lost their lives in the clashes.

The place remains under the guard of elements from the municipal and state police.