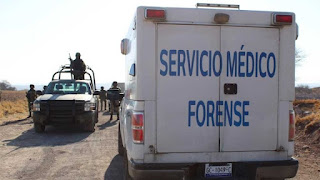 With gunshot wounds to the head and back, they located the bodies of two men on a dirt road, in the 18 de Marzo community, in Villagrán.

The men only wore pants and the bullet wounds to the head and back could be seen with the naked eye.

Two men with gunshot wounds were found dead on a dirt road, in the community of 18 de Marzo.

Around 8 in the morning, residents of the area observed two bodies lying on the ground.

When they got closer they realized that they were two men with traces of violence and blood on their backs.

The Municipal Police, upon receiving the report, went to the scene of the crime.

Between the grass and to the side of the road were the two bodies with bullet wounds in the head and back that were visible to the naked eye.

The men are listed as unidentified and are between 35 and 40 years old.

The victims were not wearing a shirt, no shoes, only jeans and they were lying face down.

Agents in Criminal Investigation went to the scene and collected data from the discovery.

It is unknown if the deceased were killed where they were found or the assailants just dumped the bodies at the scene.

So far, the State Attorney General’s Office has not provided information on the case.