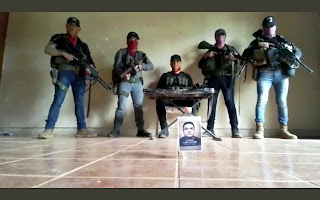 The open snitching between the warring cartels continues online. For this broadcast an armed criminal cell of hitmen for the Jalisco New Generation Cartel accuses Poncho Limón and José Luis Cabrera of the violence happening in the state of Zacatecas. Their adversaries allegedly belong to the Cartel de Sinaloa, led by Mayo Zambada.
Video translation is as follows:
Good afternoon. I address the citizens of the state of Zacatecas. The violence that has spread in Zacatecas has been caused by that faggot Alfonso Limón Sánchez aka El Ponchó Limón. And that bitch Jose Luis Cabrera. Both of these men belong to the El Mayo mob.
They’re being supported by Veronica Diaz, Deputy for the State’s development program. And Osvaldo Cerrilo, Secretary of City and Federal Citizen Protection in Zacatecas. As well Arturo López Bazán, former Secretary of Public Security of Zacatecas. Also Adolfo Marin Marin.
Governor pay attention to these public servants who support these fee collectors, extortionists, and kidnappers. They are killing innocent people. Women and children. Sincerely, Those who support the citizens. We will kill off this whole gang of scumbags. We are the absolute CJNG.
El Blog de Los Guachos