On June 11, 2022, a video was captured on a trail camera first showing two men in tan camo, carrying radios and with visible holsters, on a trail on the Arizona side of the Mexico border, close to the remote area of Arivaca which is about 11 miles from the Mexico border.  The only supplies they have are carrying the drink can and bottle they are carrying.
The camera had been set up by Arizona Border Recon, a group that reportedly reports and observes illegal smugglers and migrants. Tim Foley is the founder of Arizona Border Recon and was featured in the documentary Cartel Land. He calls it an “intelligence gathering company” rather than a militia. He organizes armed patrols of the borderlands. But others including the Southern Poverty Law Center have deemed them a civilian paramilitary militia group carrying out armed border patrols.
They will usually set up the cameras near key points or near humanitarian water and food drops from the group “No More Deaths” to help track active trails being used by both illegal migrants and drug smugglers crossing the Mexican border into the Arizona desert.

Around 20 minutes later, the camera shows a large group of men walking in the opposite direction, back towards Mexico.
At the front of the caravan is a pair of men with their hands appearing to be tied behind their backs. Several other men in similar colored camo are walking behind.

A pair of men at the back, in tan camo, are carrying pistols. While the color of the camo is similar to the first two men in the video, the color of the face covering and hat on one of the men doesn’t match, nor does the location of the visible holster. So it is not known if the armed men are the same ones from earlier in the video. 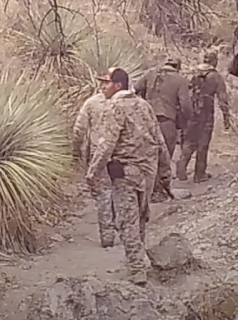 The area where the video was captured is notorious for asylum seekers, illegal migrants, and smugglers crossing the border. Arivaca is at one end of Project 28, the test of SBInet. SBInet was the effort by the U.S. Department of Homeland Security and the Boeing Company to secure US land borders using radar technology and sensors.

On 12 June 2018, a United States Border Patrol agent was wounded in an early morning shootout with Mexican smugglers near Arivaca. The US Border Patrol agent was on foot patrol and alone, responding to a movement sensor activation in Chimney Canyon along a well-known smuggler’s route, which leads north from the international boundary to Arivaca, about 10 miles north of the border. While investigating the activation, the agent was ambushed and fired upon and was shot in one of his hands and one of his legs, and several times more in his bulletproof vest. The agent who is also a paramedic was able to return fire and escape his attackers while applying first aid and retreating to his patrol vehicle, where he was able to call for assistance; eventually being evacuated via helicopter.