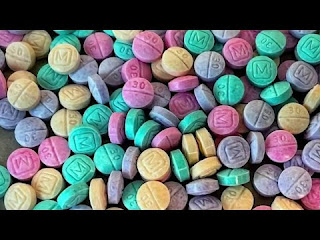 Investigators say the drugs are being sold in pills, powder, and blocks that look like sidewalk chalk or candy

It’s the deadliest drug threat in America, and it only took days for rainbow fentanyl to appear in Michigan after the DEA warned it was coming.

Investigators say the drugs are being sold in pills, powder, and blocks that look like sidewalk chalk or candy.

The DEA says it’s a new method used to target children and teens.

“Rainbow fentanyl—fentanyl pills and powder that come in a variety of bright colors, shapes, and sizes—is a deliberate effort by drug traffickers to drive addiction amongst kids and young adults,” said DEA Administrator Anne Milgram. “The men and women of the DEA are relentlessly working to stop the trafficking of rainbow fentanyl and defeat the Mexican drug cartels that are responsible for the vast majority of the fentanyl that is being trafficked in the United States.”

The Youth Connection (TYC) is a Detroit organization that focuses on substance use prevention and has Narcan training for children 14 and up. Dr. Grenae Dudley, president and CEO of TYC said an emerging trend of colorful powder and pills targeting children is devastating.

“That’s the scary part,” said Dudley. “When I get rainbow fentanyl that looks like sidewalk chalk or looks like candy what’s the first thing a baby does, you know, they pick up anything. Where’s it go? Boom, right to the mouth.”

Orville Greene, Special Agent in Charge of the DEA Detroit Field Division said since August 2022 rainbow fentanyl has been seized in 21 states, including here in Michigan.

Greene said it’s important for parents to be aware but to also talk to their children.

“It crosses all demographics, socioeconomics, geography, you know, this is all of our problems, and we should be working on a solution, and I think the education is a part of that solution. It’s not just on the enforcement side,” Greene said.

Dudley said, according to data, those serious conversations may need to happen sooner than you think.

“What we found was kids as young as nine years old are being exposed to drugs,” Dudley said. “And we want to make sure that that parent knows that and they can talk to them about choices about issues that they may be faced with.