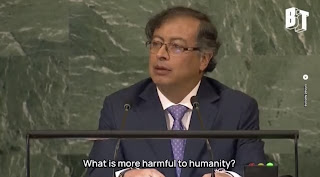 Gustavo Petro Urrego, President, addresses the general debate of the 77th Session of the General Assembly of the United Nations (New York, 20-26 September 2022).

Colombian President Gustavo Petro today (20 Sep) said the war on drugs and the fight against the climate crisis have “failed,” while the coca plant is “demonized,” and coal and oil are “protected.”

In his address to the General Assembly’s General Debate, Petro said “the jungle is burning, gentlemen, while you wage war and play with it. The jungle, the climatic pillar of the world, disappears with all its life. The great sponge that absorbs the planetary CO2 evaporates. The saving jungle is seen in my country as the enemy to defeat, as the weed to be extinguished.

The space where coca grows and the peasants who grow it – because they have nothing else to cultivate – is demonized. For you, my country is of no interest except to poisons its jungles, to put its men in jail and to throw its women into exclusion. You are not interested in a child’s education, but rather in killing its forest and extract coal and oil from its entrails.”

He said, “what is more poisonous for humanity, cocaine, coal or oil? The opinion of those in power is that cocaine is the poison and must be persecuted, even if it only causes minimal deaths by overdose, mostly caused by the mixtures added to it because of its clandestine. But, instead, coal and oil must be protected, even if its use can extinguish all mankind.”

The Colombian President said, “the war on drugs has failed. The fight against the climate crisis has failed. Mortal consumption has increased, from soft drugs to harder ones, there has been a genocide on my continent and in my country, millions of people have been sentenced to prison. So that others can hide their own social guilt, they have blamed the jungle and its plants.”

Petro is the 34th President of Colombia. He was elected this year and assumed office on 7 August.