US-based social-media tools are being used to reward participation in regime change with likes and shares.  August 16, 2020 (Tony Cartalucci – ATN) – Young protesters in Thailand are out demanding “human rights” and “democracy” – and for the current government to step down.

Should their demands be met – the opposition – headed by billionaire fugitive Thaksin Shinawatra and his Pheu Thai Party will take power. Thaksin Shinawatra and his political party represent neither human rights nor democracy. In fact, Thaksin Shinawatra is the worst human rights abuser in Thai history.So how does one explain the paradoxical nature of young people demanding “human rights” and “democracy” while paving the way to power for the absolute worst offenders of both?Ribbons and Medals, Likes and Shares Despotic French leader Napoleon Bonaparte once claimed, “A soldier will fight long and hard for a bit of colored ribbon.”In other words, feeding a soldier’s ego was at times better than paying him or threatening him to fight.Today it isn’t ribbons and medals. It’s likes and shares.
Young people who have yet to accomplish anything significant in their lives seeing their names and faces in BBC articles is as good as gold. But to do this on a much larger scale, social media has been employed.
Through a social media landscape dominated by US-based tech giants like Facebook and Twitter – the playing field is tilted deliberately in favor of these mobs – not just in Thailand – but everywhere the US seeks to manipulate and interfere in internal political affairs. 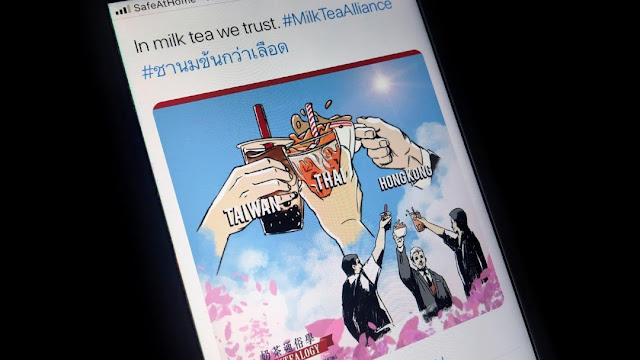 The so-called “Milk Tea Alliance” is a  large-scale propaganda tool used by the US to help build up the illusion of massive support online for their wider Asia-Pacific agenda and reward those using selected hashtags with huge amounts of likes, shares, and retweets in return.It is easy to test the veracity of this network. Using the network’s hashtags – even if the tweet itself is opposed to the hashtags’ purpose itself – still garners hundreds, sometimes thousands of likes and retweets from bots and real people mindless mashing like/retweet buttons.It is not real support or fame – but just like a ribbon or medal which is otherwise worthless – for attention-starved youths, does it matter?Youths starved for attention try many things to get it – especially online. They may first try to use their intelligence or character to gain attention. But often lacking either, they resort to engaging in dangerous or illegal behavior or saying deliberately provocative things to garner a response – good or bad from online audiences.With propaganda tools designed specifically to reward participation in Thailand’s protests – these youths mindlessly attempt to cash in on the flood of likes, shares, retweets, and other “ribbons and medals” being offered. Like a gambling addict waiting for their next big payout, these youths are hooked in a cycle of acting out, then harvesting their online social media “bounty.” It doesn’t matter to them that they are demanding “democracy” and “human rights” for an opposition that represents neither – or aiding the worst human rights abuser in Thailand’s history back into power. They are getting attention they have never had before, and will never get again. No Conspiracy Theory – The Weaponization of Social Media is Real  The London Guardian revealed in an article, “Ex-Facebook president Sean Parker: site made to exploit human ‘vulnerability’,” that social media giants exploit a vulnerability in human psychology to manipulate its users.The article explained:


[Parker] explained that when Facebook was being developed the objective was: “How do we consume as much of your time and conscious attention as possible?” It was this mindset that led to the creation of features such as the “like” button that would give users “a little dopamine hit” to encourage them to upload more content.

“It’s a social-validation feedback loop … exactly the kind of thing that a hacker like myself would come up with, because you’re exploiting a vulnerability in human psychology.”

The article notes that the exploitation of dopamine is also used by game designers including those who create automated gambling machines for casinos. 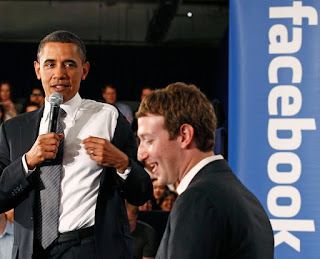 Facebook has further developed the process of manipulating its users through experiments carried out to see if online behavior could be manipulated. Articles like the BBC’s “Facebook emotion experiment sparks criticism,” would admit (emphasis added):

Facebook is facing criticism after it emerged it had conducted a psychology experiment on nearly 700,000 users without their knowledge.

The test saw Facebook “manipulate” news feeds to control which emotional expressions the users were exposed to.

The research was done in collaboration with two US universities to gauge if “exposure to emotions led people to change their own posting behaviours”.

It is also no secret that Facebook has used its ability to mass manipulate the public to advance regime change on behalf of the US government.
Articles like the New York Times’ “U.S. Groups Helped Nurture Arab Uprisings,” admit to the role the US government played in stirring up unrest in the Arab World in 2011 – leading to two devastating wars and one government after another being toppled.
It would also note the role tech giants like Facebook played, stating:

Some Egyptian youth leaders attended a 2008 technology meeting in New York, where they were taught to use social networking and mobile technologies to promote democracy. Among those sponsoring the meeting were Facebook, Google, MTV, Columbia Law School and the State Department.

Of course this wasn’t done to “promote democracy” as the New York Times suggests. An easy way to prove this is to consider how the US would respond if other nations carried out these activities against the US itself. It would almost certainly be considered an act of war.Facebook and Google – along with Twitter – are eager partners in advancing US foreign policy objectives. They admittedly have the tools needed to hook users in a “social-validation feedback loop” – as one of Facebook’s own founders has called it – and to manipulate precisely what sort of activity will provide that feedback.This is admitted by the Western media itself – not the West’s competitors or adversaries.For Thailand – Facebook and Twitter have carried out both a massive purge erasing critical voices pointing out many of these facts or a more subtle shadow banning – granting a monopoly to individuals, organizations, and automated online tools designed to create the illusion of massive online support to suck attention-seeking youths into Thailand’s anti-government protests.

This is why nations like Russia and China have either restricted, banned, or entirely replaced US-based social media networks within their information space. And why nations like Thailand and wider ASEAN should consider following suit.Youths drawn into the streets, making dishonest demands in exchange for attention online is being done deliberately to lead toward eventual violence and political as well as economic instability. It is a digital attack launched by foreign interests and their local partners just as dangerous as a physical attack launched by a foreign military. One needs only to look at the Middle East in the wake of the “Arab Spring” to see this.It is a matter of national security and should be treated as such – to protect the nation and to even protect the protesters themselves.