October 17, 2020 (Tony Cartalucci – ATN) – Despite it being Saturday – a day off for many in Bangkok, a city where over 12 million live in or around – and fair weather throughout most of the evening – anti-government protesters organized by billionaire-led opposition parties and funded by the US government failed to fill up the 3 intersections they targeted. 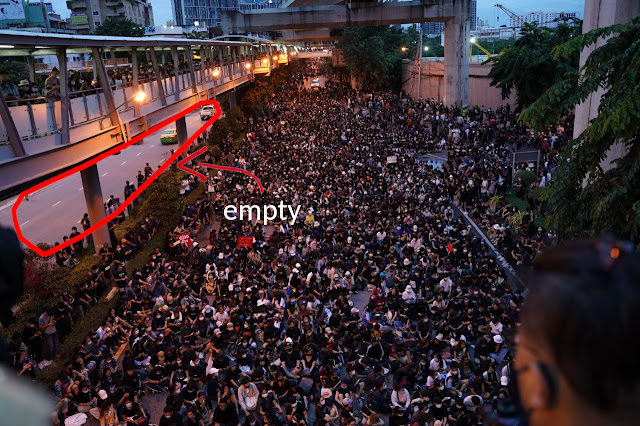 Protesters at all three locations struggled to fill up even one side of the wide roads they blocked. Their strategy deliberately targeted key intersections and the city’s mass transit system leaving tens of thousands of commuters stranded or blocked – a number much higher than the protesters themselves blocking city-wide transportation.

Outside Bangkok groups of no more than 200 at Chiang Mai and only about 200 at Khon Kaen University – where over 30,000 students study – came out to protest. A red shirt group of 100-200 attempted to block roads in Nonthaburi – directly outside Bangkok. A group of about 10-20 protested in Pattaya – a city with a population of over 100,000.

Many in the Western media even refrained this time from its claims of “tens of thousands” after two previous nights of deliberate and extreme exaggerations.

So few turned up and so little support is enjoyed by the mobs that they were forced to call off the protests early in the night. While 8pm was the targeted end time – all locations dispersed an hour or more earlier. Previous protests have attempted to last until 10pm with yesterday’s rally being easily broken up by police long before that.

It should be noted that these are not “new” protests. Anti-government protests have been organized on and off since 2014 and this most recent wave has been ongoing since general elections in 2019 in which the opposition soundly lost.

Shrinking protests lasting for shorter durations and deliberately attempting to maximize economic harm and impact on ordinary people are desperate measures being lifted from the failed likewise US-funded unrest seen in Hong Kong earlier this year. Protesters vowed to disrupt life in the city again at rush hour tomorrow.

It is likely US preparations to destabilize both Hong Kong and Thailand were made in parallel several years ago – considering US-funded organization CANVAS documents detailing tactics in Thailand drafted as early as 2016 - and little effort was made to rework the strategy in Thailand despite it failing completely in Hong Kong.

While the Western media promoting these protests claim daily unrest is “proof” the government’s attempts to end demonstrations have failed – emergency laws are aimed at incrementally arresting both the leadership of mobs in the streets as well as expose and dismantle the networks funding and directing the protests – just as China did.

Washington’s interest in backing unrest in Thailand and attempting to overthrow the nation’s political order stems from a desire to roll back Thai-Chinese relations which have grown considerably in recent years. China is now Thailand’s largest trading partner, largest foreign investor, largest source of tourism, Thailand’s largest arms supplier – replacing the US, and a key partner in several major infrastructure projects including Thailand’s 5G network rollout and a high-speed rail network that will connect Thailand to China via Laos.