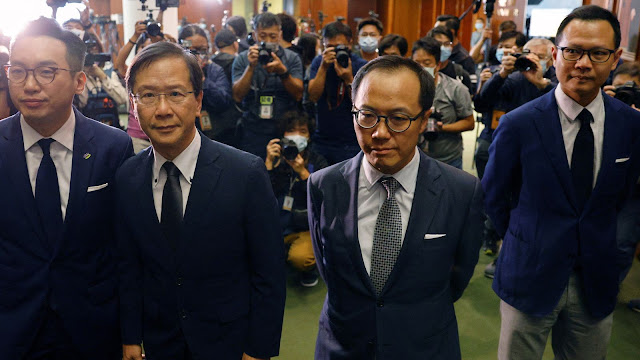 This came after a sweeping security law was passed which focused heavily on cutting foreign backing to opposition groups rioting in Hong Kong’s streets and outlawing aspirations of “independence” as a form of sedition.

With the cutting off of foreign support and the effective removal of opposition political parties supporting and driving the protests from Hong Kong’s political landscape, the prospects for another round of disruptive and violent protests is highly unlikely.

And almost as if to vindicate Beijing’s policy decisions regarding Hong Kong, the US and UK insisted on one last round of interference regarding these most recent developments.

The government has summoned China’s ambassador to register “deep concern” after Beijing ordered the expulsion of four opposition MPs from Hong Kong’s parliament.

They were expelled under a new Chinese law banning supporters of Hong Kong independence from holding office.

Foreign Secretary Dominic Raab on Thursday declared China’s action a fresh breach of the Sino-British Declaration, the deal that saw Hong Kong pass back to China from Britain in 1997.

The agreement commits China to ensuring Hong Kong enjoys a “high degree of autonomy” and preserves the right to freedom of speech.

The London Guardian would also report in its article, “Hong Kong and China could face fresh US sanctions over ousting of lawmakers,” that:

Hong Kong and Chinese officials could face further sanctions from the United States over a new law that disqualified four pro-democracy legislators as “unpatriotic” and prompted a mass resignation by the pro-democracy caucus.

The UK had violently seized the territory in 1841 and occupied it until its handover back to China in 1997. Before the handover, the British government demanded Beijing recognize a series of conditions including “democratic” procedures that ironically never existed under British rule.

More recently, the UK’s attempts to maintain influence over the territory has been aided by US interference in the form of financial, political and material support provided to opposition parties and street movements culminating in open support of protests in recent years and even featuring high-profile trips by opposition leaders to Washington D.C. to directly receive US aid.

Hong Kong was never the UK’s to legitimately determine the affairs of from the beginning and only through its own military and imperial aggression did it hold any power over the territory. It parting “demands,” while agreed to by Beijing who at the time was left little choice, have no relevance in an international order the US and UK both have regularly predicated on “might makes right.”

Currently, China has the “might” to determine what is right in Hong Kong, and Beijing has correctly decided that what is right is uprooting the remnants of Western influence and interference from its territory.

While the UK government and its much larger transatlantic partners in the US are far from giving up their collective ambitions to subordinate China and greater Asia to the West, it appears that Beijing has laid the groundwork to fully shut Hong Kong off as a vector for such efforts.

The irony is that had the US and UK not pushed as aggressively as they did in Hong Kong over the past several years it is likely their proxies would have been able to maintain some form of influence in the territory for many more years to come. But by rushing in a bid to pressure Beijing, they provided the perfect justification for Beijing swiftly and completely uproot these proxies once and for all.

What’s more is that while the US and UK’s interference in Hong Kong has led what’s being called the “Hong Kong model” by other Western-backed opposition movements across Asia targeting governments friendly to China, Beijing’s success could now provide a “Beijing model” for regional governments to likewise fully and permanently uproot Western interference from within their borders as well.

What the US in particularly had regularly referred to as “America’s Pacific Century” may yet turn out to be the eventual dusk of Washington’s hegemonic ambitions in the region.